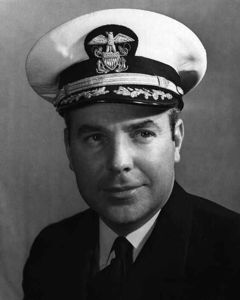 O’Bannon emerged from the Pacific war as the US Navy’s most celebrated destroyer due to three distinctions. First, she survived a well-publicized point-blank encounter with the battleship Hiei at Guadalcanal in November 1942. Second, she also participated in the Battles of Kula Gulf, Kolombangara, and Vella Lavella and was awarded the Presidential Unit Citation for her year of action in the Solomon Islands (7 October 1942–7 October 1943). Third, she earned seventeen service stars—a total unmatched among destroyers and surpassed only by aircraft carrier Enterprise, which had been at war for ten months longer than O’Bannon.

Like her DesDiv 41 sisters Nicholas and Taylor, she was a particularly lucky ship. Despite continuous front-line involvement, she lost no crewmembers and suffered damage only when she rammed Chevalier which, having been torpedoed and lost her bow, swerved into O’Bannon’s path.

« « «
O’Bannon was built at Bath (Maine) Iron Works side-by-side with Nicholas—the first two of 175 ships of the 2,100-ton Fletcher class laid down. She was placed into commission at Boston Navy Yard 26 June 1942 and after shakedown, escorted light cruiser Cleveland through the Panama Canal to the Pacific with Fletcher, where they joined Nicholas in the Guadalcanal campaign, already in progress. Her immediate roles included convoy escort and shore bombardment but in November, she participated in the celebrated Battle of Guadalcanal, where she contributed to sinking the Japanese battleship Hiei.
The history of the Pacific war can never be written without telling the story of the U.S.S. O’Bannon. Time after time the O’Bannon and her gallant little sisters were called upon to turn back the enemy. They never disappointed me.

Out-numbered, out-gunned, during the dark days of ’42 and ’43 they stood toe-to-toe with the best the Japanese Fleet could offer—and never failed to send them scurrying home with their tails between their legs.

No odds were ever too great for them to face. They fought battleships and heavy cruisers; escorted vitally needed supply ships for marines on Guadalcanal; bombarded Japanese positions; aided in dangerous rescue operations; and derailed the Tokio Express so often that the Japanese admirals ran out of excuses.

No medals, however high, can reward the gallant men of the tin-can fleet for their brave deeds. In her darkest hour their country called. They answered with flaming guns and high courage.

This is their story.

At the end of the year, De Haven, Radford, Jenkins, La Vallette, Chevalier, Strong, and Taylor began arriving and in March 1943, after De Haven was lost, the survivors were formed into Destroyer Squadron 21.

For the next seven months, these ships fought their way up the Solomon Islands chain through many more bombardments and night surface actions. O’Bannon was on hand to rescue survivors when Strong was lost 5 July 1943, and the next night participated in the Battle of Kula Gulf. A week later, she and other DesRon 21 destroyers formed the van at the Battle of Kolombangara. Finally, on 6 October, she lost a portion of her bow during the Battle of Vella Lavella when she rammed Chevalier, which had been torpedoed. After the close of the battle, O’Bannon took off survivors before Chevalier was scuttled.

This action ended the year in the Solomon Islands for which O’Bannon later received the Presidential Unit Citation. After repairs at Tulagi, she sailed home to Mare Island for overhaul.

In March 1944, O’Bannon arrived back in the war zone to resume screening convoys and the fleet and bombarding shore positions in New Guinea, the Philippines and Borneo.

After hostilities ceased on 15 August 1945, Admiral Halsey selected O’Bannon with Nicholas and Taylor to escort his flagship Missouri into Tokyo Bay for the formal surrender of the Japanese Empire. On 1 September, the day before Japan formally surrendered, O’Bannon sailed for San Francisco, where she was the first ship to arrive home from Tokyo Bay.

Like most DesRon 21 ships, O’Bannon was mothballed in 1946, then recommissioned with Nicholas to serve in Korea and Vietnam. Many more crews got to know her, with some 4,000 eventually serving on board over the years. Finally in 1970, she decommissioned in a ceremony, again with Nicholas, and then broken up in 1972.

A third O’Bannon, Spruance-class DD 987, was built by Ingalls Shipbuilding Division of Litton Industries, Pascagoula, Mississippi and commissioned 15 December 1979, the twenty-fifth of thirty-one ships in the class. Her home port was Mayport, Florida. She decommissioned in August 2005.