Visit the Taylor web site.
The first US Navy ship to anchor in peace in Japanese coastal waters at the end of World War II was a destroyer that, wrote Admiral Halsey, “admirably performed every mission assigned to her.” A lucky ship, USS Taylor, DD (later DDE) 468 earned 15 battle stars through three years of hazardous service in every major Southwest Pacific campaign from the Solomon Islands to Tokyo Bay, from which she emerged without casualties and nearly without a scratch. 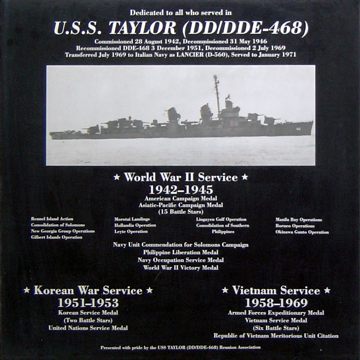 Taylor, named for a Civil War-era naval officer, was built at Maine’s Bath Iron Works alongside De Haven and commissioned in Boston 28 August 1942, the ninth ship of the 175-ship Fletcher class. After short service with DesRon 20 in the Atlantic, she was transferred to the Pacific and assigned to Destroyer Squadron 21, with which she served with distinction in the Solomon Islands, for which she later received the Navy Unit Commendation.

With the squadron’s Destroyer Division 41, she continued her career in the Gilbert and Marshall Islands operations, off the Bismarcks and New Guinea, in the Philippines and off Borneo, sinking three submarines and rescuing twenty-one airmen.

In August 1945, Admiral Halsey selected the ships of DesRon 21 present in Japanese waters—Taylor with Nicholas and O’Bannon—to escort his flagship Missouri into Tokyo Bay for the Japanese surrender. There, Taylor also transported correspondents to and from Missouri for the surrender ceremony, 2 September.

Mothballed when World War II ended, Taylor resumed her career for the Korean War and continued serving off Vietnam before being sold to the Italian Navy as Lanciere on 2 July 1969. She was used primarily as a source of spare parts before being stricken in 1971.