USS Radford, DD (later DDE) 446, was one of the United States Navy’s most decorated destroyers.

Built at Federal Shipbuilding & Dry Dock Co., Kearny, New Jersey alongside Fletcher, she was commissioned there 22 July 1942, the fifth ship of the 2100-ton Fletcher class. She was named for Rear Admiral William Radford who had overall command of the Union squadron at Hampton Roads during the battle between USS Monitor and CSS Virginia in 1862.

Radford first operated in the Atlantic and helped tow the burning transport Wakefield to Halifax. Ordered to the Pacific in December, she joined the “Cactus Striking Force” and, on 24 January 1943, was credited as the first ship to shoot down enemy planes under full radar control without having observed them. 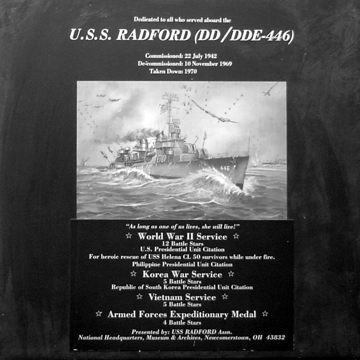 Assigned to Destroyer Squadron 21 in March, Radford screened three destroyer-minelayers in mining Blackett Strait on 7 May, which resulted in the destruction of three Japanese destroyers. Two months later, following the Battle of Kula Gulf, she and Nicholas rescued more than 700 survivors of the light cruiser Helena while breaking off action three times to take approaching enemy destroyers under fire, for which both ships received the Presidential Unit Citation. Radford also saw action at the Battle of Kolombangara a week later, after which she escorted Helena’s damaged substitute, HMNZS Leander, home to New Zealand.

Mid-war modifications took the squadron, including Radford, back to San Francisco at the end of 1943, but all returned to action during the Gilbert and Marshall Islands operations, then supported Gen. MacArthur’s push along New Guinea’s north coast and return to the Philippines, operating off Leyte and Luzon.

On 14 February 1945, Radford was mined in Mariveles Harbor at the entrance to Manila Bay while maneuvering to take in tow the damaged La Vallette which had, herself, been mined. Three Radford crewmembers were killed. Again on the West Coast for repairs, Radford did not return to the war zone but was decommissioned there, having earned 12 battle stars on her Asiatic-Pacific campaign ribbon.

In 1949, Radford was converted to an escort destroyer and served off Korea, where she earned five more stars. Redesignated DD 446 in the sixties, she was stationed in the recovery area for Project Mercury’s Sigma 7 flight in 1962, then, as Nicholas and Jenkins, was given a Fleet Rehabilitation and Modernization (FRAM) conversion in 1963. She continued operating off Vietnam until she was retired in 1969.