Table includes De Haven, which was lost before assignment to a squadron, and replacement ships Howorth and Hopewell. Ross earned no service stars while attached to DesRon 21.

In September 1942, during the early stages of World War II’s Solomon Islands campaign, the first of the 2,100-ton Fletcher-class destroyers arrived on station to form what became Destroyer Squadron TWENTY-ONE (DesRon 21). Admired for their speed and rakish design, these ships were the latest and most advanced warships of the period. They swung right into action, participating in most of the surface engagements, shore bombardments, anti-submarine and air defense actions and amphibious landings throughout the Solomons chain.

Following its organization as a squadron in March 1943, there quickly developed an esprit de corps among officers and crews, knowing that they had been and were going to be the lead ships in surface engagements with the best of the Imperial Japanese Navy. In fact, to have the crews of ships in Tulagi Harbor and Purvis Bay “man the rails” to cheer DesRon 21 DDs returning from a night action up the “Slot” was pretty heady stuff.

“Give my regards to Broadway.

“On your detachment from the South Pacific fighting forces, I wish you Godspeed. Your habit of getting into winning scraps with the Japs has made history ... DesRon TWENTY-ONE always will be remembered when Cactus, Munda, Kula, Vella and the Slot are mentioned. You may be sure I will welcome you back with open arms anytime, any ocean.

In October 1943, the squadron was ordered north to the central Pacific to join the fast carrier task forces in the Gilbert and Marshall Islands campaigns. Later it was to see action in most Pacific naval operations, ending with a leading role in the victorious entrance to Tokyo Bay for the Japanese surrender, September 1945, before being disbanded. 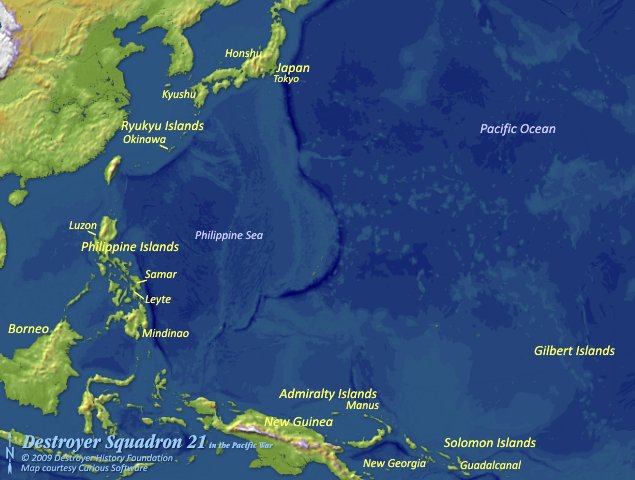