USS Chevalier, DD 451—“one of the best-officered and -manned ships in the South Pacific”—was a World War II destroyer whose US Navy career spanned little more than a year. 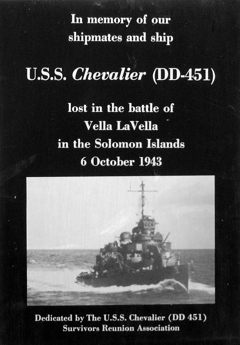 Named for a pioneering naval aviator killed in a peacetime plane crash at the age of 33, Chevalier was laid down with Strong at Maine’s Bath Iron Works in 1941 and, after Nicholas and O’Bannon, was the third ship of the 2,100-ton Fletcher class launched there in 1942. She commissioned 20 July, fourth of 175 ships in the class.

Like other Fletchers commissioned immediately afterward, the “Chevy” initially served in the Atlantic but sailed for the Pacific at the end of that year. Passing through the Panama Canal on Christmas Day, she arrived in the Solomon Islands in February 1943, just as the Guadalcanal campaign was concluding.

In March, Nicholas, O’Bannon, Chevalier and Strong were assigned as Destroyer Division 41 in Destroyer Squadron 21. Through the next months, as the New Georgia campaign commenced, the division engaged in patrol and shore bombardment, during which time Chevalier earned the additional nickname “Fighting French Cruiser.”

On the night of 7–8 May, Chevalier, with O’Bannon, Strong and Taylor, escorted cruisers Honolulu, St. Louis, and Nashville in the first American penetration of Vella Gulf, covering while Radford shepherded flush-deck destroyer-minelayers Gamble, Breese and Preble in laying mines in Blackett Strait—mines which, the next night, sank one and damaged two Japanese destroyers, which in turn were sunk by aircraft the following day.

On the night of 5 July, in Kula Gulf with Destroyer Division 41 escorting Honolulu, St. Louis and Helena, Strong was torpedoed by unseen enemy destroyers and immediately began to sink. Chevalier deliberately rammed her sister and succeeded in taking off most of the crew while O’Bannon, in line behind her, answered fire from enemy shore batteries at a range of about four miles.

On the night of October 6, during the Battle of Vella Lavella, Chevalier was second in line between Selfridge  and O’Bannon in attacking a superior Japanese destroyer force. First Chevalier and then Selfridge were torpedoed in the bows. Chevalier’s forecastle was severed by the explosion. As she swerved out of control with her undamaged powerplant threatening to drive her under, she was rammed by O’Bannon, which was unable to avoid her.

Damaged beyond recovery with 54 killed and 36 wounded, the “Chevy” fired her remaining torpedoes toward the already-disabled Japanese destroyer Yugumo, which blew up shortly thereafter. Surviving members of Chevalier’s crew were taken off by O’Bannon and she was then scuttled by a torpedo from La Vallette, which also sank her bow with depth charges before retiring in the face of enemy air attack.

Chevalier earned three battle stars during her 14½ months in commission.

« « «
On 12 June 1944, a new Gearing-class destroyer, USS Chevalier (DD 805) was laid down—like the 451, the third ship of her class from Bath Iron Works. At her launch 29 October, she was sponsored by Mrs. Marguerite Chevalier, wife of LCdr. Chevalier. Chevalier commissioned 9 January 1945 and served in the US Navy until 2 June 1975, when she was transferred to Korea as Chung Buk.