“An inspiration to all hands,” said Admiral Nimitz of the battle record of USS La Vallette, DD 448, the only American destroyer both torpedoed and mined during World War II. 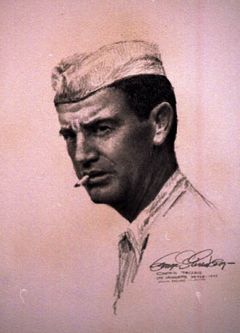 Captain Robert Taylor by George Eisenberg, “ . . . by far the best DD captain I served under and in my mind a symbol of what a wartime DD commander should be. George’s sketch is great: cig hanging, no insignia on cap, looks like a Hollywood idea of a DD skipper.”

Built at Federal Shipbuilding & Dry Dock Co., Kearny, NJ alongside Jenkins and commissioned at New York Navy Yard on 12 August 1942—the eighth ship of the Fletcher class commissioned—the second La Vallette was named for Rear Admiral Elie La Vallette, whose eventful 50-year naval career extended from the War of 1812 to the Civil War.

The “LaVadilly” began her career with training and escort duty in the Caribbean and Atlantic. In 1943, she was deployed to the Pacific where, off Rennell Island, she shot down three attacking planes in her first action, 29 January. The next day, she shot down six more planes while escorting heavy cruiser Chicago, but was hit by an aerial torpedo and lost 22 crewmembers; Chicago was sunk.

Under repair on the west coast, La Vallette was absent when Destroyer Squadron 21 was formed in March, but joined the squadron on her return to the war zone in August. On October 7, 1943, after the Battle of Vella Lavella, she was ordered to torpedo the sinking Chevalier.

In early 1944, after another west coast overhaul, the squadron returned to action for the Gilbert Islands operation. At Kwajalein, the “Dilly” anchored overnight with Phelps and other ships inside the lagoon and then joined nine battleships and other ships in a bombardment that, according to Admiral Nimitz, “exceeded in duration and intensity anything previously known in warfare . . . ” She next moved north for the Marshall Islands operation, then west for the push along New Guinea’s north coast and the return to the Philippines—Leyte Gulf, Ormoc Bay, and the Luzon landings at Lingayen Gulf.

In February 1945, in Mariveles Harbor at the entrance to Manila Bay, La Vallette was again badly damaged. Operating in support of minesweepers there, she fouled a mine herself, sustaining major damage and losing six more dead and 23 wounded. While maneuvering to take her in tow, Radford also struck a mine on this occasion; fortunately, both ships were able to retire under their own power.

Made seaworthy again only at the end of April, La Vallette spent May returning to San Francisco. In an unfortunate incident at Guam, she rammed the veteran flushdecker Stringham, APD 8, but enjoyed a warm welcome at Pearl Harbor with a congratulatory message from Admiral Nimitz (see quote above). Full repairs at Hunter’s Point Navy Yard lasted into August and she ended the war at San Diego, having earned 10 battle stars.

Like her surviving squadron mates, the “Dilly” was decommissioned in 1946. Unlike them, however, she saw no further service in the US Navy. Instead, she remained in the Reserve Fleet until 1972 when she was sold to Peru, which used her for spare parts before she was broken up.