As the third squadron of 2,100-ton Fletcher-class destroyers planned, it was intended that DesRon 23 consist of nine ships commissioned mid-October 1942 through mid-February 1943:

Aulick and Converse were first to arrive in the South Pacific, where they were at first attached to DesRon 22. On 10 March 1943, Aulick ran aground in poorly-charted waters off Nouméa and returned to the West Coast for extensive repairs.

The squadron was activated at Boston 11 May under the command of Captain M. J. Gillan with Foote, Spence and Charles Ausburne present. Transiting the Panama Canal, these ships joined with the others in Adm. Halsey’s Third Fleet at Nouméa, 29 June, where they commenced patrol and escort duty.

On 23 October, Capt. Gillan was relieved by Capt. Burke, whose experience in the Solomon Islands (as division commander in DesRon 22 and, briefly, commodore of DesRon 12) and insight (from studying the Battle of Tassafaronga in particular) had led to development of a doctrine of independent destroyer operations first applied by Cmdr. Frederick Moosbrugger at the Battle of Vella Gulf.

Operating off Bougainville with Task Force 39 (Cruiser Division 12—Montpelier, Cleveland, Columbia and Denver—under Rear Admiral A. S. “Tip” Merrill, in action in the Solomon Islands since the Guadalcanal campaign), the eight ships of the squadron—now known as the “Little Beavers”—themselves put Burke’s doctrine to practice in battle off Bougainville’s Empress Augusta Bay, 1 November. There, Foote was torpedoed and had to be towed home, while Thatcher sideswiped Spence and also had to return to the West Coast for repairs.

Through 23 February 1944, the "Little Beavers" continued operations, prominently at Green Island, Rabaul and Kavieng plus Truk in the Caroline Islands, credited with sinking one cruiser, nine destroyers, one submarine and several smaller ships, and destroying approximately 30 aircraft as well as inflicting much damage via shore bombardment. Claxton was hit by return fire off Bougainville during one such mission, 4 February, and made her way back to the West Coast, where her stern was replaced.

“Commodore Arleigh Burke provided the fire of leadership that fused a squadron of destroyers into a superb combat organization … a real fighting outfit with that vital combat ingredient we know as ‘fighting spirit’ . . . which extended beyond the individual ship to create a sense of pride in, and loyalty to, the entire squadron.

“Each ship was good—not only because her men were good, but also because she belonged to DesRon 23! In this, each ship contributed to a higher standard, and each ship strove to live up to the reputation earned by the whole squadron.”

Other ships of the squadron were at Okinawa when the war ended.

In February 1946, the squadron was deactivated and the ships placed in mothballs at Charleston, South Carolina. Braine recommissioned in 1951 and served as flagship of DesRon 21 before being sold to Argentina in 1971; Converse was sold to Spain in 1959; Charles Ausburne, Claxton and Dyson were sold to the German Bundesmarine in 1959–60.

DesRon 23 was reactivated in 1956, initially with the Fletcher-class Stephen Potter (flagship), Picking, Irwin, and Preston. It remains active today.

« « «
On 17 October 1945, after returning to the east coast via the Panama Canal, Charles Ausburne, Claxton, Dyson and Converse stopped briefly at Nortolk, then steamed up the Potomac River to Washington, DC. Two days later, they received the Presidential Unit Citation in ceremonies at the Washington Navy Yard attended by Admirals Halsey and Mitscher and Capt. Burke, who later served three terms as Chief of Naval Operations. 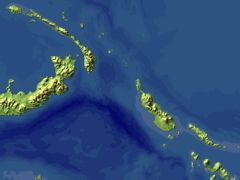 Bougainville and approaches to the Bismarck Archipelago including Empress Augusta Bay and Cape St. George.

In 1982, Converse shipmates Sam Pompei and Clarence “Red” Lail initiated a reunion of all “Little Beavers” at Arlington, Virginia and the Washington Navy Yard in October 1983. More than 1,000 people attended this event. The two-tier 40-person head table included Admirals Burke and Duggan, Associate Supreme Court Justice Byron “Whizzer” White (DesRon 23 staff under Capt. Burke), the active ComDesRon 23 and many retired skippers of the WWII “Little Beavers” ships and/or their wives. A memorial service held at the Navy Yard, near where the squadron moored in 1945, was especially touching.

In 1989, Red Lail again led the “Little Beavers” to a joint reunion with the Charles Ausburne group at Bath for the launching of USS Arleigh Burke, DDG 51. Members of the original squadron were also present for her commissioning, 4 July 1991, and for her twentieth anniversary, 4 July 2011. 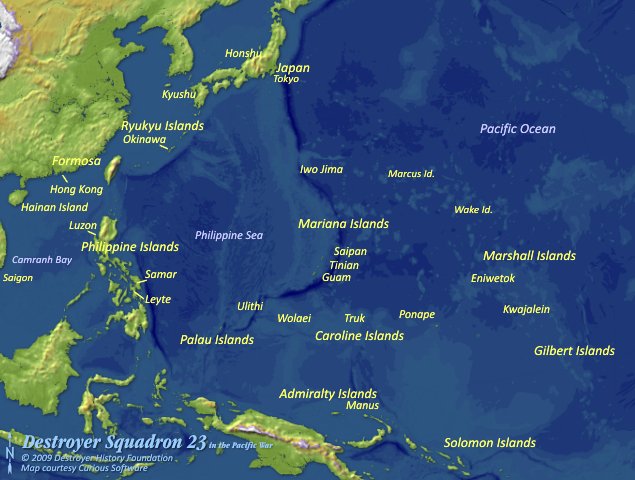