1 De Haven (DD 469), the prospective division flagship, was sunk on 1 February 1943, before the squadron was formed.

2 Later in 1943, Converse, which had not operated with the squadron, was reassigned to DesRon 23 and in October was replaced in DesDiv 44 by Sigourney (DD 643)

Destroyer Squadron 22 was, with DesRon 21, one of the first two squadrons of 2,100-ton Fletcher-class destroyers formed in March 1943. It was initially composed of nine round-bridge ships commissioned as follows:

Ships of the squadron gathered in the South Pacific in early 1943. Early arrivals in the war zone, Waller and Conway were in the screen during the Battle of Rennell Island, 29–30 January. Two days later, De Haven (DD 469), DesDiv 44’s intended flagship, was sunk.

On 5 March, before the squadron was formed, Waller, Conway and Cony screened Rear Admiral A. S. “Tip” Merrill’s new Cleveland-class cruisers Montpelier, Cleveland and Denver on a sweep into Kula Gulf in which Waller, with ComDesDiv 43 Commander Arleigh A. Burke embarked, torpedoed Japanese destroyer Murasame.

Through the Solomon Islands campaign until the fall of 1943, destroyers of the squadron operated in varying combinations with those from other squadrons in the theater, screening Admiral Merrill’s cruiser division and conducting sweeps and shore bombardment missions. Though by chance they did not engage in the named battles of 1943, the nine destroyers became veterans and figured in every operation until they were gradually replaced in Admiral Merrill’s task force by DesRon 23. In October, Sigourney arrived to replace Converse, which had been reassigned to DesRon 23.

After one of the longest tours of duty in the Pacific war, the squadron returned to the West Coast for refit, then arrived back in the war zone in time for the Marianas operation and the capture of Tinian. While not at Leyte, its ships figured in the Luzon operation before continuing south with the Seventh Fleet to Borneo with ex-DesRon 56 Robinson as flagship. The exception was Pringle, which participated in “Operation Iceberg” at Okinawa and was lost. 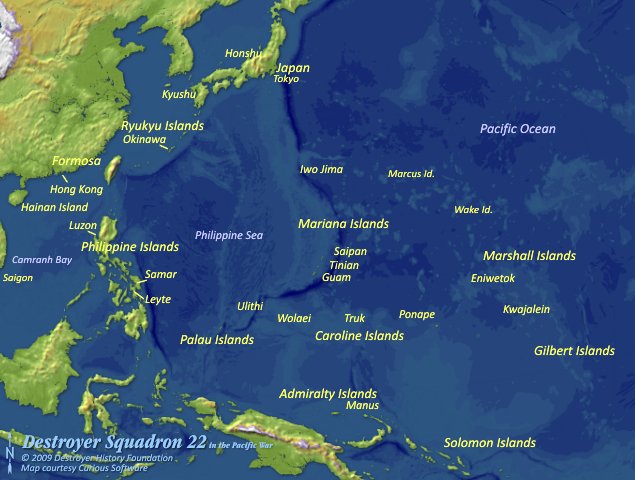