Below: Converse off Hunters Point after modifications, 1944.

The USS Converse, as you know, was one great ship. We like to think that perhaps it was the greatest in the entire fleet during World War II. 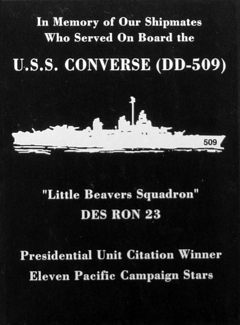 As Admiral Arleigh (31-Knot) Burke says during an interview taped and sent to each of you on a cassette, our reunion was so successful because we were successful as a crew. Had we failed at sea and at war then perhaps we might not have been quite so anxious to see each other.

Some historians have called the USS Converse “a lucky ship, as well as a great ship, a ship to be envied,” but our Capt. E. H. McDowell perhaps said it best: “Hard work, dedication and every man aboard knowing his job, and doing it well, at all times, make for good luck at sea.”

We lost one shipmate, Fire Controlman Ray Crum, aboard ship during all our years at sea. The memories of that unfortunate accident will linger forever in our minds. But, considering what the ship went through in those hectic war years, Admiral Burke perhaps put it aptly when he said, “The USS Converse was indeed a great, great ship, but the Lord was indeed watching over her, too. Without Divine guidance, no ship could have endured so much, so long, as did the USS Converse.”