“Click with the Claxton” was a shipmates’ saying that emanated early during the first wartime cruise of USS Claxton, DD 571 under Commander Herald Stout. But the pair of clicking dice she had painted on her bridge wings was only the first of many signatures and distinctions.

Built at Consolidated Steel Corporation, Orange, Texas, named for a midshipman in the War of 1812 and commissioned 8 December 1942—the 25th 2,100-ton Fletcher-class destroyer—Claxton was assigned to Destroyer Squadron 23. Joining Orange sisters Charles Ausburne and Dyson, and Charleston Navy Yard-built Stanly in DesDiv 45, she became “tail-end Charlie”—customarily last in line when the division formed column.

There are no known photographs of the original.

When Capt, Arleigh Burke took command of the squadron in October 1943 and inspected Claxton, he came across torpedoman James Bowler putting finishing touches on artwork of an indian boy shooting an arrow into Tojo’s backside. Recognizing the protagonist as “Little Beaver” from a then-popular comic strip and deciding that a nickname would be good for the squadron, the commodore adopted it and soon a less-suggestive version of the cartoon appeared on the bridge wings of all the ships.

None of the Little Beavers had a more diversified and eventful career than Claxton. She participated with her division in the Battles of Empress Augusta Bay and Cape St. George, and in the following operations for which the squadron was later awarded the Presidential Unit Citation.

On 4 February 1944 off Buka, while bombarding positions at Sarime Plantation, Claxton was seriously damaged by return fire, which wounded 15. Claxton completed her mission with her three forward guns, but returned via Purvis Bay to the west coast, where her stern was replaced. 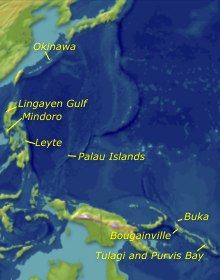 During her overhaul, Capt. Stout requested that a wrap-around “captain’s walk” be installed around the forward side of navigating bridge, connecting the bridge wings so he would not have to run through the pilot house to see what was happening on the other side of the ship. Though he was relieved by Capt. Hubbard before the ship put back to sea, this modification was completed, making Claxton the only known high-bridge Fletcher so equipped during World War II.

Claxton began her second wartime tour in August 1944. Screening escort carriers, she took part in the invasion of the Palaus in September. For the invasion of the Philippines, she covered underwater demolition teams preparing the beaches, then gave screening and fire support during the landings on 20 October.

Claxton was flagship of division “X-ray” at the Battle of Surigao Strait—Capt. Hubbard was the officer in tactical command of the division, which consisted of DesRon 23’s Aulick plus Cony, Sigourney, Thorn and Welles. The division initially screened the battle line, then joined the pursuit of survivors of the Japanese Southern Force.

A week later, on 1 November, Claxton was hit in one of the first deliberate suicide plane attacks of the war by a Japanese plane that exploded in the water to starboard, killing five and wounding 23. As DesDiv 48 flagship Abner Read closed to assist, she was also struck by a suicide plane, which sank her. Claxton rescued 187 officers and men.

After repairs at Tacloban and Manus, Claxton returned to action on fire support, patrol, and escort duty for the Lingayen Gulf landings 9–18 January 1945. Continuing action in the Philippines, she conducted bombardments and covered landings on Luzon and Mindanao and in the Visayas through early May.

On 16 May she arrived off Okinawa where she stood radar picket and fighter-director duty. On 6 June, she was attacked by 12 enemy aircraft but drove them off with gunfire.

Undamaged during the remainder of the Okinawa Gunto operation, she sailed home from there at the close of the war with Charles Ausburne, Dyson and Converse. Returning to the east coast via Panama, they put into Norfolk briefly, then sailed up Chesapeake Bay and the Potomac River to Washington Navy Yard, 17 October, where they received their Presidential Unit Citations two days later. In addition to this award, Claxton earned eight battle stars during World War II.

Claxton was overhauled at New York Navy Yard, then decommissioned and placed in reserve at Charleston 18 April 1946. On 15 December 1959, she was loaned under the Military Assistance Program to the Federal Republic of Germany, and served in the Bundesmarine as destroyer Z-4, In 1981 she was sold to Greece, which cannibalized her for spare parts.

« « «
USS Stout, DDG 55, the sixth Arleigh Burke-class guided missile destroyer, was named for her Captain Stout, the only destroyer named for a Little Beavers skipper.