USS Spence, DD 512 “always did more than her share,” wrote Admiral Arleigh Burke in 1983 of the original flagship of Destroyer Division 46—a tightly-run, happy ship with a reputation for great chow, which served with distinction with Destroyer Squadron 23, the “Little Beavers,” until she was lost during the great typhoon of 18 December 1944. 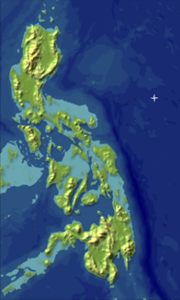 “Each time I hear the name USS Spence, I feel like a mother who has lost her first born and, being a sentimentalist, I shed a tear . . . ”

After shakedown in the West Indies and a convoy escort run to Casablanca, April–May 1943, Spence passed through the Panama Canal in June and saw her first action in the Pacific war supporting landings at Baker Island in September.

Arriving in the Solomon Islands later that month, Spence helped destroy 20 Japanese barges off Vella Lavella 1–2 October, then was attached to Destroyer Squadron 23 under Capt. Arleigh Burke as flagship of Cmdr. B. L. “Count” Austin’s Destroyer Division 46 (with Thatcher, Converse and Foote).

At the Battle of Empress Augusta Bay that night, Spence and Thatcher, which had misunderstood a turn command, scraped past one another at a combined speed of 60 knots. Later in the battle, Spence received a shell hit below the waterline, contaminating fuel oil and reducing her speed, but continued her attack with Thatcher and Converse, launching torpedoes at fleeing enemy destroyers.

With Thatcher and Foote damaged, DesDiv 46 was reduced to Converse and Spence for the Thanksgiving Battle of Cape St. George, where they finished off destroyer Makinami. (For this action, Spence had only three boilers in commission, restricting her expected top speed to 31 knots. When the commodore passed on this news to Adm. Halsey’s staff, they used it in padding their reply and it became his nickname: “31-knot” Burke.)

Following additional operations in the Solomon and Bismarck Islands, for which ships present in the squadron received the Presidential Unit Citation after the war, Spence operated off New Guinea and participated in bombardments of Truk and Ponape in the Caroline Islands. 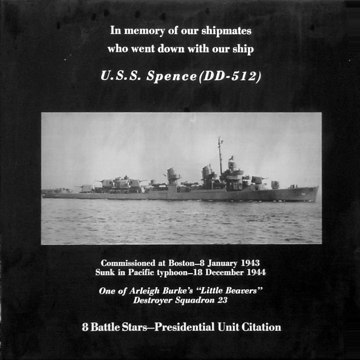 Spence also screened carriers for during air strikes and the occupation of the Marianas, including the Battle of the Philippine Sea (the “Marianas Turkey Shoot”), in June and July. In August, she sailed for San Francisco for a six-week overhaul at Hunter’s Point and trials, departing 5 October.

In November, Spence joined Task Force 38.1 (Wasp, Yorktown, Cowpens and Intrepid) operating from Ulithi, nearly colliding with Wasp when her rudder jammed during refueling, 12 November. On 10 December, with her task force, Spence departed Ulithi for air strikes against Luzon.

One week later, Spence prepared to refuel and pumped out all salt water ballast from her tanks, but this operation was postponed due to heavy seas, breaking fuel lines and a near-collision with Adm. Halsey’s flagship New Jersey. The next day, 18 December, the weather built into a typhoon. At about noon, Spence’s rudder again jammed. Caught with insufficient ballast for the extreme conditions, she capsized and sank. Only 24 shipmates, all topsides crew, survived to be rescued by USS Tabberer (DE 418), which also picked up survivors of Hull.

« « «
Her loss was widely mourned and for the 1983 Little Beavers reunion, when Bath Iron Works wanted to present a model to Adm. Burke and asked shipmates which ship it should be, Spence was the answer. The model is now at the Navy Museum, Washington Navy Yard.