USS Jenkins, DD (later DDE) 447, was a destroyer with a long and varied career that encompassed most of the history of the US Navy’s 2,100-ton Fletcher class, World War II through Vietnam.

Laid down at Federal Shipbuilding & Dry Dock Co., Kearny, NJ, side-by-side with La Vallette, she commissioned 31 July 1942, the sixth ship of the 175-ship class. The second Jenkins was named for 19th century Rear Admiral Thornton A. Jenkins, Chief of the Bureau of Navigation and President of the Naval Institute. 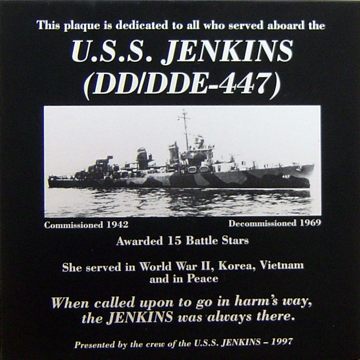 After shakedown, the “Mighty J” began operations in October 1942 by escorting a convoy to North Africa where, in November with DesRon 8’s Wainwright (flagship), Mayrant and Rhind, she screened battleship Massachusetts during the bombardment of Casablanca.

Redeployed to the Pacific in January 1943, she operated with Destroyer Squadron 21 in supporting the invasion of New Georgia Island and participated in the Battles of Kula Gulf and Kolombangara. Back again in the southwest Pacific after a mid-war overhaul, she was damaged by a shore battery off Luzon in December 1944, but remained in the war zone.

In April 1945, DesRon 21 was supporting the last amphibious operation of the war to cut off Japanese oil supplies from Tarakan, Borneo. Patrolling in a channel that had been thoroughly swept, Jenkins nonetheless struck a mine, losing one man killed. Her bow came to rest on the bottom, and she remained there overnight. Under her own power, she returned first to a floating drydock in Subic Bay, then through heavy weather to the west coast for repairs. She was there when the war ended, having earned 14 battle stars.

Recommissioned as an escort destroyer (DDE) in 1951, she served off Korea (1 star) and then continued annual cruises to the Far East for peacekeeping operations with the Seventh Fleet. Like Radford and Nicholas, Jenkins underwent a FRAM conversion at Pearl Harbor in the early sixties; then operated off Vietnam from 1966 until 1969, when she was retired.