“So good that we cannot spare them,” said the Commander, Amphibious Force, Pacific Fleet of Richard P. Leary and sister Heywood L. Edwards, twin destroyers with parallel careers. Laid down together at Boston Navy Yard 4 July 1943, on slipways vacated by Newcomb’s and Bennion’s launch earlier that day, the two ships were also christened together 6 October. Leary was named for Rear Admiral Richard Phillips Leary, whose US Navy career spanned the Civil and Spanish-American Wars. 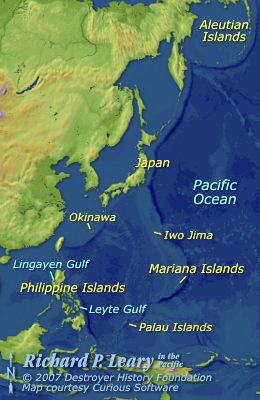 On 23 February 1944, Leary followed her twin sister into commission, the 155th ship of the 2,100-ton Fletcher class and Boston Navy Yard’s last destroyer. After shakedown off Bermuda, she went to the Pacific where she was attached to Destroyer Squadron 56, with which her World War II career spanned the Marianas, Palaus, Leyte Gulf, Lingayen Gulf, Iwo Jima and Okinawa campaigns. Among highlights:

From all these operations, the “Arpy” emerged without damage or loss of life, a record that “cannot he passed off as mere luck [but] is due to outstanding performance of duty by all officers and men . . . ” wrote the squadron commander.

On 10 December 1946, Leary decommissioned and was transferred to the Pacific Reserve Fleet. On 10 March 1959, again with Heywood L. Edwards, she was transferred to the Japanese Defense Force and renamed Yugure (“evening”, “dusk” or “autumn twilight”). She was returned to US custody 10 March 1974, stricken from Naval Vessel Register on 18 March, and sold to China Dismantled Vessel Trading Corp., Taipei, Taiwan 1 July 1976.

« « «
“It is the earnest desire of the squadron commander to see every man receive recognition for the outstanding performance mentioned herein,” wrote Capt. Herald F. Stout in his letter recommending Navy Unit Commendations for both Heywood L. Edwards and Richard P. Leary. In one of the post-war period’s apparent miscarriages, however, while the Edwards crew received the award, the Leary crew did not. Shipmates of other DesRon 56 destroyers agreed, however, that with a record “as good as and in some respects better than any ship*” in her distinguished squadron (four of which received Navy Unit Commendations and one a Presidential Unit Citation), Richard P. Leary well deserved the citation that Capt. Stout envisioned.