The lone American ship damaged at the Battle of Surigao Strait was the one that pressed the attack most closely—USS Albert W. Grant (DD 649).

She was laid down at Charleston Navy Yard side-by-side with Bryant, 30 December 1942, the yard’s last two Fletcher-class 2,100-tonners. Both ships launched 29 May 1943; Albert W. Grant commissioned 24 November—with Melvin the 128th ship of the class. She was named for VAdm. Albert W. Grant, late commander of the Atlantic Fleet.

After a shakedown cruise to Bermuda, Albert W. Grant joined the Pacific war in April 1944. Alone among ships of Destroyer Squadron 56, to which she was later attached, she operated with the Seventh Fleet in support of landings at Hollandia, part of Gen. MacArthur’s New Guinea jungle campaign. During the summer, she and other ships of her squadron were attached to the Fifth Fleet for the invasion of the Marianas, with Albert W. Grant operating in a fire support unit at Tinian with Robinson and Bailey. 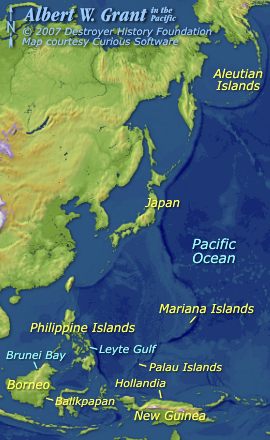 Albert W. Grant in the Pacific.

For the nighttime Battle of Surigao Strait south of the Leyte beachhead, 25 October 1944, the squadron was divided into three sections: Grant was assigned to the center section with flagship Newcomb and Richard P. Leary. As they went into the attack against the lone remaining Japanese battleship, the American battle line behind them opened fire overhead.

Albert W. Grant, herself, figured prominently in this classic attack, during which the American battle line opened fire directly overhead in spectacular display. In line behind squadron flagship Newcomb and Richard P. Leary as the three ships closed the enemy to launch five torpedoes each at a range of three nautical miles, the Grant was alone in holding her course to launch five more. Caught in crossfire and disabled by 22 hits, including many 6-inch rounds from cruiser Denver, she was towed clear from alongside by Newcomb after firing ceased—the only American ship damaged during the battle at a cost to the Japanese of two battleships and three destroyers sunk and three cruisers damaged.

Albert W. Grant was repaired at San Pedro and returned to Mare Island Navy Yard for overhaul and received the Navy Unit Commendation “for outstanding heroism in action” during the battle. Rejoining the Seventh Fleet in the Philippines in May 1945, she participated in the final amphibious operations of the war at Balikpapan and Brunei Bay, Borneo; then with Richard P. Leary was deployed to Alaska. The war ended before further operations could be undertaken, however, and after participating in occupation duty in Japan, she returned to the West Coast.

Albert W. Grant decommissioned 16 July 1946 and was placed in reserve at San Diego. There she remained until stricken from the Navy List 14 April 1971. She was sold 30 May 1972 and broken up for scrap.