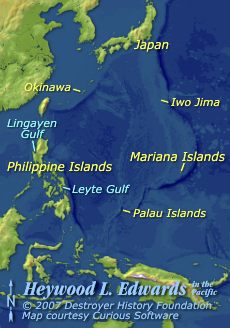 USS Heywood L. Edwards, DD 663, was laid down at Boston Navy Yard 4 July 1943 side-by-side with Richard P. Leary. The two ships were also launched the same day, 6 October, and Edwards commissioned 26 January 1944, the 147th ship of the 2,100-ton Fletcher class. She was named for the commanding officer of flush-deck destroyer Reuben James (DD 245), which sunk in the Atlantic before the United States joined World War II.

After shakedown in the West Indies, Edwards joined the Pacific war in April 1944 attached to newly-formed Destroyer Squadron 56.

At Leyte during the Battle of Surigao Strait, 25 October, Edwards, Leutze and Bennion constituted Section 3 of Destroyer Squadron 56, which launched torpedoes against the enemy column from the west and then searched for surviving enemy ships the following morning.

Heywood L. Edwards earned seven stars on her Asiatic-Pacific campaign ribbon for her service in World War II and the Navy Unit Commendation for “outstanding heroism in action” in the Marianas, Palau, Leyte, Iwo Jima and Okinawa operations of 1944–45.

On 10 March 1959, again with the Leary, the Edwards was transferred to Japan. Commissioned as Ariake (“dawn, but still the moon remains in the sky” or “break of dawn”), she served until scrapped in 1976.