“Nelson’s accolade to his sailors, ‘They fought as one man, and that man a hero,’ could well be applied to her crew,” wrote historian Samuel Eliot Morison of USS Newcomb, DD 586—“superbly handled” in the decisive Pacific campaigns of World War II.

Laid down and launched at Boston Navy Yard side-by-side with Bennion and commissioned 10 November 1943, the 125th ship of the 2,100-ton Fletcher class, Newcomb was named for the commander of revenue cutter Hudson in the Spanish-American War. 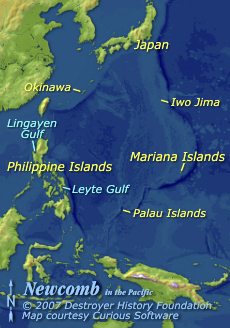 After shakedown in the West Indies, the “Mighty N” joined the Pacific war in April 1944 as flagship of newly-formed Destroyer Squadron 56. Following two months of patrol in the Marshall Islands and a return to Pearl Harbor, she served as transport screen flagship for the invasions of Saipan and Tinian in the Marianas—where she provided fire support and, with Chandler (DMS 9), sank submarine I-185—followed by the invasions of the Palau Islands and the Philippines.

At Leyte during the Battle of Surigao Strait, 25 October, Newcomb, Richard P. Leary and Albert W. Grant were dead ahead of approaching Japanese battleships when the squadron was ordered to “get the big boys.” Launching torpedoes as opposing heavy ships exchanged fire overhead, Newcomb shipmates counted three timed hits on flagship Yamashiro, which sank soon thereafter. Untouched, she retired, then returned to stand by Grant—which had been hit and disabled in the attack—and towed her clear from alongside.

Newcomb also participated in the follow-up Ormoc Bay and Mindanao operations and rode out the great typhoon of December before moving north to Luzon’s Lingayen Gulf. There, during a massive air raid on 6 January 1945, she was hit by “friendly fire,” which produced numerous casualties. Off Iwo Jima with her squadron in February, she recorded another possible submarine kill. 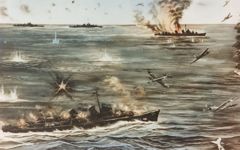 On 6 April, Newcomb and Leutze were operating together off Okinawa’s west coast when the Japanese began retaliating for the landings there five days earlier. Of the many hundreds of planes attacking that day, Newcomb was targeted by seven kamikazes and hit by as many as five. These demolished all her engineering spaces and superstructure except for her bridge, killing 40 and wounding 24. (Leutze, standing by, was also hit and nearly sunk.)

Under repair for ten weeks at nearby Kerama Retto with a 75-man skeleton crew on board, Newcomb was made sufficiently seaworthy for a two-month tow back to Hunter’s Point, where she arrived 8 August. With the end of the war, however, it was determined not to continue her restoration. Decommissioned 20 November, therefore, she was stricken from the navy list in March 1946 and scrapped at Mare Island in October 1947.

In addition to the Navy Unit Commendation for “brilliant combat service,” which “added new luster to the finest traditions of the United States Naval Service,” Newcomb earned 8 service stars on her Asiatic-Pacific campaign medal.