“The history of the Pacific war,” wrote Admiral Halsey, “can never be written without telling the story of the USS O’Bannon,” leading all American destroyers in World War II with 17 service stars earned. 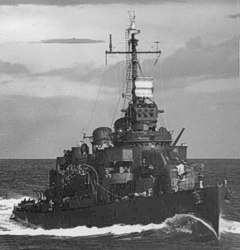 Named for the “hero of Derne,” whose 1805 exploit is commemorated by the phrase “to the shores of Tripoli” in the Marine Corps Hymn, the second O’Bannon, DD (later DDE) 450, was laid down at Maine’s Bath Iron Works as the second destroyer of the 175-ship Fletcher class. Launched and commissioned in 1942, she went directly to the South Pacific where, during the Battle of Guadalcanal (13 November), she boldly attacked the Japanese battleship Hiei and other warships at short range before retiring safely.

O’Bannon’s good fortune held for an entire year in the Solomon Islands, where she operated with Destroyer Squadron 21 through hazardous patrol, escort and bombardment duty, in the Battles of Kula Gulf, Kolombangara and Vella Lavella, and during the rescue of crewmembers of Strong and Chevalier when those ships were sinking. Sustaining damage but no casualties, she became known among shipmates as the “Lucky O” and later received the Presidential Unit Citation for her “splendid achievements and the gallant fighting spirit of her officers and men” during this time. 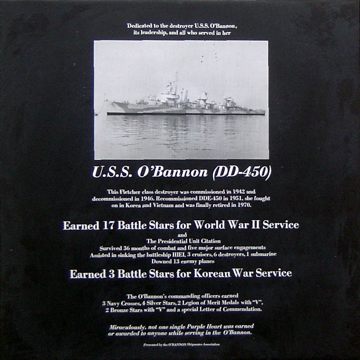 Approaching Japan in August 1945, Admiral Halsey directed that she and twin sister Nicholas, with Taylor, be assigned to his Flagship Task Group “because of their valorous fight up the long road from the South Pacific to the very end.” At his order, she then left Tokyo Bay the day before the surrender and sailed for San Francisco, where she was greeted as the first warship to return from Japanese home waters.

Mothballed when World War II ended, O’Bannon resumed her career as an escort destroyer for the Korean War (3 battle stars), then continued serving in the Pacific. On hand for Operation Ivy, the test of the first hydrogen bomb at Eniwetok, September–November 1952, and the atomic tests at Johnston Island in 1962, she also operated in plane guard and shore bombardment duty off Vietnam. In 1966, she served with the Gemini 11 spacecraft contingency recovery force, then was retired in 1970 and scrapped two years later.