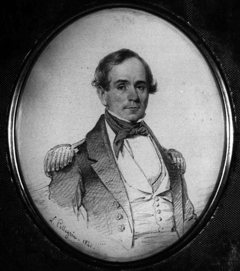 An 1841 engraving of then-Captain La Vallette by Francis Pellegrin.

The Admiral, a member of a distinguished French family, formally anglicized his name to Lavallette in 1830. His son, A.T. La Vallette, secretary of the Barnegat Land Improvement Company, which initiated the town’s development, also adopted that spelling. Two US destroyers later named for him, however, retained the French spelling.

Born 3 May 1790, La Vallette had made several voyages in the merchant marine before accepting a Navy appointment as sailing master in 1812. In September of 1814, he was an acting lieutenant aboard Saratoga, Commodore Thomas Macdonough’s flagship at the Battle of Lake Champlain, where the British were defeated in a decisive engagement of the war.

The young La Vallette is mentioned often in Charles G. Muller’s biography of Macdonough, although he is identified throughout as “Elie Vallette.” Muller describes him as tall and muscular, and in one dramatic passage pays tribute to his courage during the battle: “From Saratoga’s midships the crash of a ball and a shout brought the Commodore’s gaze to a still tumbling officer and the shot box upon which he had stood. The Commodore’s heart sank. But Elie La Vallette slowly, deliberately picked himself off the deck, examined his shredded uniform, shrugged his gargantuan shoulders, and resumed charge of his guns.” 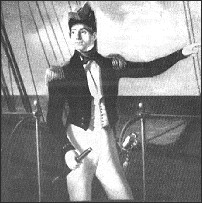 La Vallette’s first command came in June of 1817, when he took schooner Dispatch on a survey of Virginia’s coast and harbors. He then served as lieutenant on a number of larger ships and in 1824 was assigned to Constitution. While on duty in the Mediterranean, he was acting captain for several months, and continued to serve on the ship until 1828.

After leaving Constitution, La Vallette held a series of routine assignments before being ordered to take sloop-of-war Fairfield to Guayaquil, Ecuador, to protect the United States interests during a revolution. He left the United States in May of 1833, taking along a young sailing master he thought showed promise—a lad named Stephen Decatur—and reached Guayaquil in February of 1834. After receiving assurances American lives and property would be protected, he brought Fairfield home, making the run from Valparaiso to Hampton Roads in a little more than two months.

In 1840, he received his commission as a captain, and in the Mexican War commanded the Independence and the Congress. For a time in 1848, he served as military Governor of Mazatlan, just below the Gulf of California, and the crew of the Congress comprised the occupying garrison. It is reported they left the sunny beaches and superb fishing grounds with considerable regret. Later, his assignments included command of the African Squadron, the East Indian Squadron and the Mediterranean Squadron.

Reproduced with the kind permission of the Ocean County, NJ, Internet Site