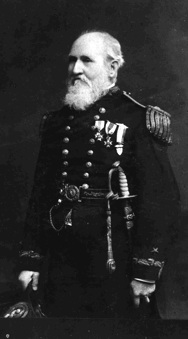 Thornton Alexander Jenkins was born in Orange County, Virginia on 11 December 1811 and entered the Navy as a midshipman 1828 at age 16. The following spring, he sailed in Natchez for Cuba, where he performed hazardous services in breaking up nests of pirates. In 1831 he assisted in suppressing Nat Turner’s insurrection in Virginia. He was commissioned as lieutenant on 9 December 1839 and from 1834–1842 was employed as assistant to Professor Ferdinand R. Hassler on the Coast Survey.

In 1845, Jenkins was sent to Europe to examine lighthouses and aids to navigation. The following year, although he returned prematurely to prevent being detained in the event of war with Great Britain, he delivered a detailed report on the illuminants, towers, light-ships, buoys, beacons and other adjuncts of the lighthouse service in England, France and other European countries.

During the Mexican War, Jenkins served as executive officer in the sloop Germantown and commanded landing parties in the capture of Tuspan and Tobasco. He later commanded the storeship Relief and the supply and hospital station on Salmadena Island.

In 1848–51, when Professor Alexander D. Bache was superintendent of the Coast Survey, he commanded John Y. Mason, Jefferson and Corwin (built from his designs and under his supervision) in condicting meteorological and hydrographic observations and in taking deep sea temperatures in the Gulf Stream.

During the Civil War, Captain Jenkins commanding the steam screw sloop Richmond and, as fleet captain, was senior officer present in the West Gulf Blockading Squadron under Admiral David G. Farragut. He and James Strong were among Farragut’s captains present at the Battle of Mobile Bay; he later served as Farragut’s chief-of-staff. Publications during this time included “Code of Flotilla and Boat Squadron Signals for the United States Navy” of 1861 and “The United States Naval Signal Code” of 1867, both prepared by authority of Navy Secretary Gideon Welles.

Following the Civil War, as an expert in meteorology, Jenkins completed tours as Chief of the Board of Navigation and Secretary of the Light-House Board through 1871, and was promoted to rear admiral in 1870. His completed his active duty career in command of the Asiatic Squadron and retired on 12 December 1873. Thereafter, he had charge of the Navy Department Exhibit at the Centennial Exhibition at Philadelphia in 1876 and from 1883 to 1885 served as President of the Naval Institute.

He died on 2 August 1893 and is buried at Arlington National Cemetery.