Some fine writing is available regarding Nicholas. Here we present the following authors: 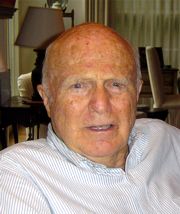 On 29 August 1945, I was on the USS Benner, DD 807, one unit of over one hundred Third Fleet warships anchored in Sagami Wan, with the great snow-covered Mt. Fuji in the distance. It was a beautiful day.

And at daylight, there was my old ship, the Nicholas, getting under way—honored to lead the entire armada, which stretched single file over the horizon into Tokyo Bay.

It was and is the most spectacular sight I ever saw.