Sinking the Chevalier
By George Eisenberg
George Eisenberg was assigned to La Vallette’s Combat Information Center.
The Solomon Islands chain is located due east from the southern tip of New Guinea. The Solomon Islands from the air looks like an elongated necklace forming a narrow strip of water referred to as the “Slot.” Many of these islands are occupied by the Japanese military.

Perhaps the most famous among this group is Guadalcanal. The Japanese lost Guadalcanal but held on fiercely to the other island strongholds. Supplies and troops were being constantly moved in and out of these bases. Our mission at this stage is to destroy and take over these important bases. Our nightly raids are part of this relentless process.

The “Tokyo Express,” comprised of varying sized Jap combat ships, were used to protect their supply lines and troop movements in and out of these important strategic islands. The procedure in this nightly operation of attack would be to form a small task group of four to six destroyers, then head for the mouth of the Slot in the late afternoon, steaming at high speed, gauged to arrived into enemy territory under the cover of darkness.

In indian fashion, we would skirt the shoreline using radar to pick up all enemy surface vessels, usually filled with supplies or troops. They logically chose to run at night to avoid the far more dangerous daylight aerial bombings from the close-by American airfield at Munda.

Some of our missions included firing star shells over such enemy targets. This type of shooting was in a sense like dropping a very bright flare behind a ship or group of landing barges, thus silhouetting them to create easy targets for our raiding destroyer group. So far, we have been sinking barges and ships three out of four nights.

What a grueling week this has been. Today we are steaming towards Vella Lavella with a convoy of our Marines and supplies. There are six “cans” protecting four LSTs and five APDs for this mission. A few hours after landing our convoy on Vella Lavella, now held by our Marines, my ship and two other destroyers were ordered to proceed at high speed to reinforce three other destroyers already en route to hunt down and sink six to nine other Jap combat ships sighted in the Slot. We poured on the superheat at thirty-five knots. One of our speeding destroyers developed engine trouble, which slowed us down for thirty minutes before she could regain her thirty-five knot ability. 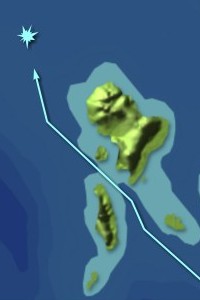 Approach of La Vallette following the Battle of Vella Lavella. Click to view this image in more detail.

As we approached our rendezvous in the Slot, we could see shell fire many miles ahead. One small group was already engaged with the enemy. One Jap destroyer was hit and in flames, sinking.

Despite the tremendous odds in numbers, our three feisty ships held their own, but not unscathed. The Selfridge was hit in the bow by a torpedo but still had its power. The Chevalier, too, sustained a torpedo hit, which had blown off its bow up to the bridge. In those frenzied moments to help, the O’Bannon’s momentum could not be reversed enough to hold back its movement into the starboard side of the wounded Chevalier. The hit was just enough to allow the sea to flood both fire rooms and one engine room.

The Chevalier was dead in the water. All three cans involved in the premature exchange were damaged and needed help. When we caught up with them, we were ordered to take chase after the Jap destroyers already disappearing over the horizon westward. Our chase was in vain and we had to return to support our wounded ships and help retrieve any more possible survivors before the morning light.

The waters were covered with oil. The Chevalier was doomed and sinking. Her bow floated separately midst all the debris. The Selfridge and O’Bannon both managed to stay afloat with enough power to make a maximum of 9 knots.

The clock was ticking and still the Jap bombers overhead continued dropping their eggs. One came dangerously close to our side. We suffered no damage. It was very dark and fortunately this was our best protection. We did not return their fire. It would have given our position away for a continued bombing attack.

The sunrise would soon be upon us and the prospects of survival were desperately thin. The disappointed night bombers returned to their base to wait for sunrise and easy targets. The Japanese air force was very close at hand and because of the narrow configuration of the waterway, our maneuverability was dangerously limited. Unfortunately, our disabled position left us vulnerable to a strong air attack that we expected very soon at first light. Almost every destroyer in our group had sustained damage to their radar equipment. Ours remained intact.

Solomon Sea, site of the Battle of Vella Lavella. Click to view this image in more detail.

One of the survivors of the sinking Chevalier was, ironically, Lawson Watts, who was until recently a signalman from our own ship and temporarily assigned to the Chevalier. A last ditch effort to search for any possible survivors was underway. Watts bravely volunteered to go back to the sinking Chevalier for that purpose and secondly to make sure that all secret information had been properly destroyed.

Still oil-smeared but in dryer clothes, Watts left with the boarding crew in the whaleboat. They were fully equipped and prepared for any encounter. The whaleboat disappeared into the night as we stood motionless in the water less than a thousand yards from our ill-fated sister ship. Orders were already dispatched for us to sink the Chevalier upon return from our rescue mission.

Soon the whaleboat returned. No one was found alive aboard the wreckage. The last ditch effort was made. Time was slipping by and our chances would be better if we could get back to the mouth of the Slot.

With our orders to torpedo the Chevalier, we all took our positions in the ship. At this moment, I was being covered in the CIC (Combat Information Center), which allowed me to watch the happening from the starboard radio deck. Our ship was close to the target. The Chevalier was a vague silhouette in the murky darkness. Lt. Jack Davis was on the starboard torpedo director, cranking in all the computer data for the single torpedo to be accurately directed for the hit. Those whose stations were topside watched in frozen attention as Jack shouted, “Fire one!”

We all started to count the number of seconds it would take for the torpedo to reach its target. It seemed like an eternity . . . “could I have missed?” queried Jack. More seconds and then suddenly the ship burst into a small red ball of fire followed by a huge blinding explosion that sent lines of exploding ammunition streaking in all directions.

I ran for the port side an none too soon. Metal fragments of shrapnel rained all over the water and the ship as well. We escaped without damage or injury.

I suddenly realized that all the disabled ships and protective screen had already left south, heading for the mouth of the Slot. Their maximum speed was only 9 knots and it would take us no time for our ship to catch up with them.

Soon the first signs of light triggered the tingling sense of fear. We soon would be sitting ducks facing tremendous odds. The job of scouring the waters in a last ditch effort for survivors wiped out some of the ominous fears yet to come. The oily slick and debris compounded our search for any signs of life. The moment came and we charged southward to catch up with our crippled task group.

The Japanese air force was only twenty miles away located on Bougainville. We poured on the superheat and at thirty-five knots caught up with our group still traveling at nine knots.

All ships were aware of the precarious position we were in. The worst was yet to come. I was now sitting at my air tracking table. We were still far into enemy waters flanked by enemy territory, submarines and the airfield on Bougainville. Thank God our SC radar was still in operation to detect any approach of enemy planes. Our SG radar kept us informed on all surface craft as well as our relationship to the enemy territory that surrounded us.

At this time, the bridge had already called Munda for air support. It was getting light and the Jap air force would have no problem finding us. It would be like shooting fish in a barrel.

Help was on its way. I sat at my air tracking table when that expected shocking moment arrived. “Holy Christ!!! A shit pot of bogies heading our way! Maybe twenty-five!” Radar found those fearful blips filling the PPI scope. “Give me a range and bearing!!” In a few minutes I had their course, speed and height.

The crucial moment came. We now picked up the approach of our fighter planes. Ten were on their way, but could they get here in time?? The visual crisis unfolded before our eyes. We were in grave danger. Out fighters had only one chance pass at stopping the enemy before they could inflict devastating damage.

They certainly had enough bombers in the sky to do the job. I grabbed the “mic” of the VHF a step away from my plotting table. We were seconds away from disaster because of the short distances closing fast.

I was nervous and almost panicky. I had never done this before.

“Sandman, this is Ruby Leader, over!”

“Sandman, Sandman, roger wilco and out!!!”

Oh my God! All eyes were glued onto the PPI scope. I kept getting ranges and bearings, tracking both groups of planes flying at right angles to each other ’til in moments they merged. It was a moving picture ending; it was unbelievable.

A dog fight ensued and in minutes the enemy planes were shot down and dispersed. The collective sigh of relief could have moved clouds.

Truly it was a miraculous save and I’m sure for the years to come we will tell our grandchildren of this great adventure that we survived. We passed through the mouth of the Slot and out of harm’s way once again.