The last American destroyer lost in World War II and the last Allied ship sunk in the Okinawa Gunto operation in July 1945 was one named for the task force commander killed at the Naval Battle of Guadalcanal in 1942, USS Callaghan (DD 792).
Visit the Callaghan sailors’ web site.

The seventh Fletcher-class 2,100-tonner built at Bethlehem Steel Co., San Pedro, California, Callaghan was laid down on 27 November 1943. At her launch on 1 August, she was sponsored by Mrs. Daniel J. Callaghan, widow of Rear Admiral Callaghan. She was placed in commissioned on 27 November under Commander F. J. Johnson and attached to Destroyer Division 109 of Destroyer Squadron 55 in the Pacific Fleet.

On 5 February 1944, Callaghan sailed from the West Coast to join Destroyer Division 110, Laws, Longshaw, Morrison and Prichett, in the screen of Admiral Raymond A. Spruance’s Fifth Fleet in strikes on the Palaus, Yap, Ulithi and Woleai from 30 March to 1 April. 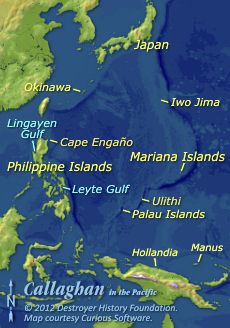 In April, Callaghan and squadron flagship Porterfield operated from Manus as picket ships during air strikes and escorts for the fleet train in support of the General Douglas A. MacArthur’s Hollandia operation on New Guinea’s north coast.

Thereafter, Callaghan’s career was similar to those of Porterfield and her other sisters in DesDiv 109, Cassin Young, Irwin and Preston, also from Bethlehem, San Pedro.

« « «
For Operation “Iceberg,” the invasion of Okinawa, Callaghan and her squadron stood out from Ulithi and, on 26 March, commenced three months of fire support and screening duty. The Army declared Okinawa secure on 21 June but offshore radar picket stations were still active and on 9 July, Callaghan was assigned to this duty.

Shortly after midnight on 28 July, as her crew looked forward to an imminent return home after 18 months at sea, Callaghan drove off a biplane intent on suicide but, unseen, the plane circled back. At 0041, it struck her on the starboard side near the No. 3 upper handling room while a bomb penetrated the after engine room. Fires soon began to detonate antiaircraft ammunition, which prevented nearby ships from closing to assist before Callaghan flooded by the stern and sank at 0235. One officer and 46 men were lost; two officers and 71 men were wounded.