Laid down 30 June 1942 at Seattle-Tacoma Shipbuilding Corp., Seattle, Washington, Morrison was the builder’s seventh of 21 2100-ton Fletcher-class destroyers. At her launch early on 4 July 1943, she was named a for Civil War coxswain and Medal of Honor recipient. She commissioned 18 December 1943 under Comdr. Walter H. Price, USN, the 137th of 175 2,100-tonners to join the fleet. 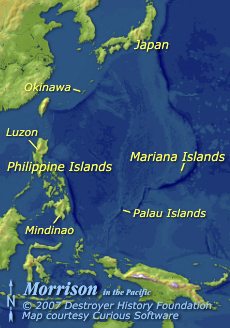 On 6 January 1944, Morrison cleared Puget Sound for a heavy-weather shakedown run to San Diego where, on the 9th, she commenced training exercises. Departing on the 24th with passengers, ammunition, torpedoes and supplies for Pearl Harbor, she continued drills and exercises from 1 March, then joined a task unit sailing for Majuro in the Marshall Islands. In April, she screened carriers during operations in the Admiralty and Caroline Islands, returning to Pearl Harbor 9 May.

Departing 31 May for the assault on the Mariana Islands, Morrison with Laws and Benham escorted escort carriers Kitkun Bay and Gambier Bay of VAdm R. K. Turner’s Fifth Fleet attack force, which arrived off Saipan 15 June to commence air strikes. There, attached to Destroyer Squadron 55, she provided gunfire support for the landings and shot down three planes during an air attack on the 17th.

For the Leyte invasion in October, Morrison was assigned with Cassin Young, Irwin, Gatling and cruisers Birmingham and Reno to screen light carrier Princeton (CVL 23). On the 24th, Princeton was conducting air strikes on Luzon from a position off its east coast when an enemy dive bomber broke through the clouds and scored a direct hit, igniting a severe fire on her hanger deck. To help fight the fire and take off personnel, ships of the screen, Morrison in her turn, came alongside to take off personnel.

As the two ships rolled in the swells with Morrison to starboard, however, her mast and forward stack locked between Princeton’s boiler uptakes. Trapped for nearly an an hour of sustained wrenching to her superstructure, Morrison finally broke free before Birmingham came alongside in her place (only to be showered with debris as Princeton’s magazines exploded, causing heavy casualties).

With Princeton too far gone to be saved, Irwin and Reno were ordered to scuttle her with torpedoes and gunfire. Collectively the screening ships rescued 1440 Princeton officers and men—Morrison alone about 400, before retiring first to Ulithi with Birmingham, Irwin and Gatling and then to San Francisco. She and Irwin, also heavily damaged, each received the Navy Unit Commendation for this action. 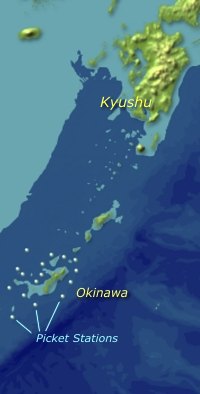 Radar picket stations in the Okinawa operation. Click to view this image in more detail.

Under repair at Hunters Point 17 November 1944–9 February 1945 and in training off Hawaii 15 February–3 March, Morrison missed the Iwo Jima invasion with her squadron but on 21 March returned to Ulithi. Four days later, she sortied with the Fifth Fleet for the Okinawa invasion. Arriving off Okinawa on the 25th, Morrison’s first action came on the 31st. While escorting a convoy, Stockton had attacked and apparently damaged Japanese submarine I-8. Steaming to relieve her, Morrison attacked with depth charges, forced the sub to surface and then sank it with gunfire.

The Okinawa landings commended the next day and for the next two weeks, Morrison drew a full range of gunfire support and other assignments. On 14 April, she received a fighter-director team and, with little time out for logistics, was assigned to Radar Picket Stations #10 to the west, #7 to the south, #2 in the direction of Japan to the northeast to relieve Daly, damaged by a suicide plane on the 28th, and finally adjacent #1 on 30 April.

On the morning of 4 May, Morrison was on station with Ingraham and four landing craft. When enemy planes appeared, Morrison, as usual, coached her combat air patrol into position to intercept and, in an hour-long battle, the Corsairs shot down two. Others broke through, however. While Ingraham and LCS 31 were hit, LSM(R)-194 was sunk and LCS-21 was also damaged, four suiciders struck Morrison in quick succession; three more grazed her and two others narrowly missed. There were also bomb explosions.

Ripped apart, Morrison sank in fifteen minutes, before there was time to abandon ship. “Pall bearer” LCS-21 picked up 179 officers and men, 108 of whom were injured. The remaining 152 shipmates, including most of those stationed below decks, were lost, “all the more regretted in view of the gallant fight to the finish,” wrote Capt. Frederick Moosbrugger, commanding the Okinawa destroyers. Admiral Nimitz concurred and Morrison received a second Navy Unit Commendation for this action.

In addition to her two Navy Unit Commendations, Morrison received eight battle stars for World War II service. In July 1957, her remains were among those donated to the government of the Ryukyu Islands for salvage.