USS Twining (DD 540) was commissioned at Bethlehem Steel Company, San Francisco on 1 December 1943. After the usual shakedown, she reported for duty with the Pacific Fleet in February 1944.

For two months, ships of Destroyer Squadron 53, including Twining, were utilized at Pearl Harbor for training and operations. Twining left Pearl Harbor in May of 1944 with the with the Marianas invasion force and arrived at Saipan 13 June. There, she acted as a bombardment and fighter director ship throughout the Saipan and Tinian occupations. On 15 June 1944, she silenced a shore battery on Nafutan Point, Saipan after a brief exchange of salvoes. Later than same night, her fire blew up a huge enemy ammunition near Aslite airfield.

During the period 16–23 June 1944, Twining operated with Task Force 58 west of the Marianas in the defense against enemy air and surface actions in the Battle of the Philippine Sea. Destroyer Division 106 less Wedderburn (DD 684), plus Monssen (DD 798) was ordered out ahead of battle-line as radar picket line. In this position on 19 June, Destroyer Division 106 bore the brunt of enemy air attacks against our force. Twining was credited with the destruction of three planes. 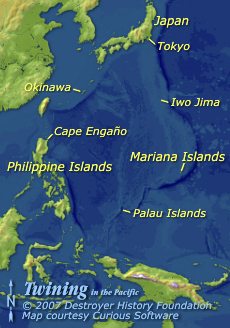 After the Battle of the Philippine Sea, the ship returned to Saipan and continued close support work there and at Tinian, before returning to Eniwetok in August 1944 with a machinery derangement. After repairs were completed there, the ship had the unique experience of riding out a small typhoon in a floating drydock.

On 15 September 1944, Twining left Eniwetok and reported to Admiral Halsey’s Fast Carrier Task Force 38, with which she operated in support of the Palau invasion (19–28 September) and the initial raids on Luzon (21–22 September) proceeding to and replenishing at Ulithi Atoll from 1 October to 6 October.

Twining left Ulithi on 6 October 1944, with Task Force 38 to operate in support of the Leyte invasion (6 October–9 November and 14–22 November). In order to further support the Philippine landings, Task Force 38 carried out the initial raids on Okinawa and Formosa from 12 October to 15 October, receiving considerable opposition from enemy aircraft. Twining receiving credit for shooting down one enemy plane during the night of 12 October.

Following these raids, she returned to the Philippine area, where she participated with her squadron in the Cape Engaño engagement of the Battle for Leyte Gulf (25–26 October) and continued operations in this vicinity until 9 November, when she returned to Ulithi for a short period of upkeep.

From 10 September 1944, until 20 January 1945, still with the Fast Carrier Task Force, Twining operated in support of the invasion of Luzon and the China Sea Sortie of the Third Fleet with raids on Indo China and the China Coast. It was during this period (17–18 December) that the Third Fleet rode out a terrific typhoon, with three ships lost and and other ships sustaining considerable damage. Twining—standing by USS Monterey, which was on fire—came through with only minor damage.

The Fleet sortied from Ulithi on 10 February, now under the command of Admiral Spruance and known as “Famous Task Force 58,” and proceeded to the home waters of the Japanese Empire. There, it carried out the initial Naval raids on Tokyo as a diversion for the Iwo Jima occupation. On 20 February, Destroyer Division 106 was detached for a shore bombardment mission to Iwo Jima with San Francisco, Boston, Astoria, Wilkes-Barre and Pasadena, returning to Task Force 58 on 22 February.

From this time on, Twining operated continuously in Japanese waters with Task Force 58, which carried out endless strikes against Japan home islands of Kyushu, Honshu and Hokkaido and directly supported the invasion of Okinawa and the engagement off Western Kyushu in which the Jap battleship Yamato was sunk. Periods for upkeep and recreation in port were extremely limited, although the crew was thankful for the last two weeks of June at Leyte, which enabled it to effect necessary repairs and enjoy a small amount of shore recreation.

In the closing days of the Okinawa campaign, Admiral Spruance’s Fifth Fleet reverted to the command of Admiral Halsey as Third Fleet. After her availability at Leyte ended 1 July, Twining returned to Japanese waters to continue the strikes on the homeland. During the night of 24–25 July, Destroyer Squadron 53, with Cruiser Division 17, closed the Japanese coast for an anti-shipping sweep of the Kii Suido and a bombardment of the Shiono-Misaki airfield. Twining returned to Task Force 38, which continued air strikes until 15 August 1945, when word was passed that Japan had agreed to unconditional surrender terms and ordered a cease-fire.