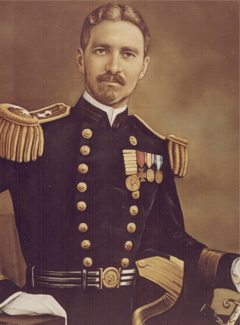 Nathan Crook Twining belonged to a family with a long history of military service. Son of a Civil War veteran, he was born 17 January 1869 at Boscobel, Wisconsin. Appointed a naval cadet in 1885, he was graduated from the United States Naval Academy on 7 June 1889.

During the Spanish-American War, Twining served in Iowa (Battleship No. 4) off Cuba and later was executive officer of Kearsarge (Battleship No. 6) when that ship circumnavigated the globe with the “Great White Fleet.” He commanded Tacoma (Cruiser No. 18) during the bombardment of Vera Cruz in 1914.

Regarded as one of the Navy’s most brilliant officers, he served as Chief of Staff for Rear Admiral William S. Sims, Commander of Naval Forces in European waters During World War I, and was also a member of the Allied War Council. He also served as Chief-of-staff of the Pacific Fleet under Admiral Hugh Rodman, but was ordered home due to ill health in 1923.