’The only American destroyer that survived the Battle off Samar in 1944 was one that continued her career in the Pacific during World War II, in the Atlantic during the 1950s, and in the Argentine Navy until 1982—USS Heermann (DD 532).

The Last Stand of the Tin Can Sailors, the extraordinary World War II story of the U.S. Navy's finest hour by James D. Hornfischer.

Heermann was the seventh 2,100-tonner built at Bethlehem Shipbuilding’s San Francisco Yard. A low-bridge ship, she was laid down on 8 May 1942 and launched on 5 December. She commissioned on 6 July 1942 in sequence after Trathen and Hazelwood and before Hoel and McCord. The five formed Destroyer Division 92 in Destroyer Squadron 47.

After shakedown training out of San Diego, Heermann joined the Fifth Fleet on 21 October 1943. Attached to Rear Admiral Harry W. Hill’s Southern Attack Force for the Gilbert Islands operation (Operation “Galvanic”) in November, she and Hazelwood plus DesRon 25’s John Rodgers, Harrison, McKee, Murray and Sigsbee formed the destroyer screen for transports and provided fire support during the landings at Tarawa Atoll, where Heermann sank a small enemy craft inside the lagoon.

After additional training at Pearl Harbor, Heermann operated in the Marshall Islands Operation for the landings at Kwajalein (Operation “Flintlock”) in January 1944, where she screened escort carriers offshore. At Eniwetok (Operation “Catchpole”) in February, her division less Johnston plus Stembel, Dewey and Hull formed the transport screen for Capt. D. W. Loomis’ Reserve Force (TG 51.1)—later the Eniwetok Expeditionary Group (TG 51.11)—where they supported landings at Parry and Japtan Islands.

After retiring to Majuro, Heermann moved south to Purvis Bay at Florida Island, Solomon Islands, where she joined the Third Fleet’s Task Force 39 on 18 March 1944. For the next month, she escorted troop and resupply convoys during the occupation of Emirau Island and hunted enemy supply barges along the coast of nearby New Hanover Island in the Bismarck Archipelago. She also participated in the bombardment of a tank farm at Fangelawa Bay, New Ireland, on 11 June and earned a star with Task Group 30.4 for antisubmarine operations along sealanes between the Solomons, Admiralties, Carolines and Marshall Islands until 26 June.

The summer of 1944 found Heermann busy escorting navy and merchant shipping as far south as Espiritu Santo in the New Hebrides Islands and Nouméa, New Caledonia. On 6 September, she cleared Port Purvis with Rear Admiral William D. Sample’s escort carrier force that for the invasion of the Palau Islands.

After replenishing at Manus, Heermann sortied on 12 October 1944 with a fire support group for the liberation of the Philippine Islands. After escorting transports and landing craft to the Leyte beachhead, she and her squadron joined Rear Admiral Thomas L. Sprague’s Escort Carrier Group (Task Group 77.4). 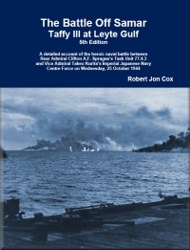 THE BATTLE OFF SAMAR

Dawn of 25 October 1944 found “Taffy 3,” Heermann’s Northern Air Support Group of six escort carriers, three destroyers and four destroyer escorts, off Samar Island steaming north. At 0645, lookouts observed antiaircraft fire to the northward and, within three minutes, the formation was under heavy fire from Japanese Admiral Kurita’s powerful Center Force of four battleships, six heavy cruisers, two light cruisers, and 11 destroyers. The only chance the American ships’ survival appeared to lie in slowing the enemy advance while withdrawing toward Leyte Gulf and hoped-for assistance. Immediately, the carriers launched their planes to attack the Japanese vessels and the escorts commenced generating smoke to hide the American ships.

Heermann, in a position of comparative safety on the disengaged side of the carriers at the start of the fight, steamed into the action at flank speed through the formation of “baby flattops” which, after launching their last planes, formed a rough circle as they turned toward Leyte Gulf. Since smoke and intermittent rain squalls had reduced visibility to less than 100 yards, it took alert and skillful seamanship to avoid colliding with friendly ships during the dash to battle. Heermann backed emergency full to avoid destroyer escort Samuel B. Roberts and repeated the maneuver to miss Hoel, the screen flagship, with which she prepared for a torpedo attack.

The track charts below show the progress of the battle.

As she began the run, dye from enemy shells daubed the water nearby with circles of brilliant red, yellow, and green. Heermann replied by pumping her 5-inch shells at one heavy cruiser, Chikuma and firing four torpedoes at another, Haguro. When the second of these “fish” had left the tube, Heermann changed course to engage a column of four battleships whose shells began churning the water nearby. She trained her guns on Kongo, the column’s leader, at which she launched three torpedoes. Then she quickly closed Haruna, the target of her last three torpedoes, which were launched from only 4,400 yards. Believing that one of the “fish” had hit the battleship, she nimbly dodged the salvoes which splashed in her wake as she retired. Japanese records claim that the battleship successfully evaded all of Heermann’s torpedoes, but their formation was disrupted in its pursuit of the American carriers. The giant Yamato, with her monstrous 18.1-inch guns, was even forced out of the action altogether when, caught between two spreads, she reversed course for almost 10 minutes to escape being hit.

Heermann sped to the starboard quarter of the carrier formation to lay more concealing smoke and then charged back into the fight a few minutes later, placing herself boldly between the escort carriers and the column of four enemy heavy cruisers. Here she engaged Japanese cruiser Chikuma in a duel, which seriously damaged both ships. A series of 8-inch hits flooded the forward part of the plucky destroyer, pulling her bow down so far that her anchors were dragging in the water. One of her guns was knocked out but the others continued to pour a deadly stream of 5-inch shells at the cruiser, which also came under heavy air attack during the engagement. The combined effect of Heermann’s guns and the bombs, torpedoes and strafing from carrier-based planes was too much for Chikuma, which tried to withdraw but sank during her flight.

As Chikuma turned away, heavy cruiser Tone turned her guns on Heermann, which replied shell for shell until she reached a position suitable to resume laying smoke for the carriers. At this point, planes from Admiral Stump’s Taffy 2 swooped in to sting Tone so severely that she, too, broke off action and fled. The courageous attacks of the destroyers and aircraft thus saved the outgunned task groups.

Heermann retired to Kossol Passage for temporary repairs before getting underway for Mare Island and overhaul, which was completed 15 January 1945. She then returned to the western Pacific to join fast carrier task forces in raids against the Japanese mainland.

LATE WORLD WAR II AND AFTER

During the assault and occupation of Iwo Jima (Operation “Dragoon”) in February, Heermann supported operations ashore by radar and antisubmarine picket duty. On 20 March, she sank a small surface vessel and rescued seven of her crew after she went down. Seven days later, she took part in the night bombardment of Minamo Daito Jima.

During the Okinawa campaign (Operation “Iceberg”) beginning in March, she took several enemy planes under fire as she guarded carriers which provided air support for troops ashore. On 18 April, with Mertz, McCord, Collett and Uhlmann and planes from the light carrier Bataan, Heermann sank Japanese submarine I-56, a carrier of the dreaded “kaitens”—human-guided suicide torpedoes. In late June, she retired to Leyte Gulf for replenishment.

On 1 July, Heermann sortied in the screen of the fast carrier force—now Third Fleet—which devoted the ensuing five weeks to almost continuous air strikes and bombardment. On 15 August, the day the cease-fire was announced, Heermann was operating on a radar picket station 200 miles southeast of Tokyo when a suicide plane emerged from a cloud bank and began to dive on her. She splashed it—one of the final naval actions of World War II. During preparations for the surrender, Heermann’s carriers turned to air cover and air-sea rescue. She entered Tokyo Bay on 16 September and remained in the area to support the occupation forces until 7 October, when she sailed for the United States.

Heermann decommissioned on 12 June 1946 at San Diego, where she remained in reserve until recommissioning on 12 September 1951. On 4 January 1952, she changed base to Newport, Rhode Island, from which she operated south to the Virginia Capes and in antisubmarine warfare and fleet problem assignments during a winter cruise to the Caribbean. A crossing to Plymouth, England in June–July 1953 was followed by a world cruise beginning in December. Calling at San Diego, Hawaii, Yokosuka, Okinawa, Korea, Iwo Jima, Hong Kong, Singapore, and, en route home via the Suez Canal, Port Said, Naples, Villefranche and Barcelona.

Heermann departed Newport again in February 1956 to join the Sixth Fleet in exercises off Lebanon, Israel and Egypt. In April, she furnished a 40-man honor guard for the wedding of Prince Ranier of Monaco to Grace Kelly. She returned home in May, but in November sailed one more time for the Mediterranean for antisubmarine excerises with the Italian Navy and a return visit to Monaco. Back home permanently in February 1957, she served as a school ship for gunnery and Naval Academy midshipmen training until 20 December, when she was place out of commission and assigned to the Reserve Fleet at Boston.

On 14 August 1961, Heermann was transferred on a loan basis to the government of Argentina under terms of the Military Assistance Program. She served in the Argentine Navy as ARA Almirante Brown (D-20) for 20 years and was scrapped in 1982.