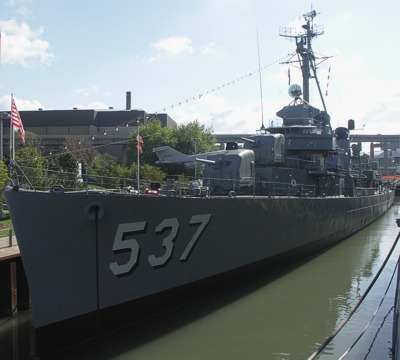 The first The Sullivans (DD-537) was laid down as Putnam on 10 October 1942, the twelfth of eighteen Fletcher-class 2,100-tonners built at Bethlehem Steel’s San Francisco Yard. Renamed The Sullivans on 6 February 1943, she was sponsored at her launch 4 April by Mrs. Thomas F. Sullivan, mother of the five Sullivan brothers. She commissioned 30 September 1943, Comdr. Kenneth M. Gentry in command. Following shakedown, she trained off Pearl Harbor where she joined Destroyer Squadron 52 in Division 103 with Bethlehem-built sisters Miller (DD 535), squadron flagship Owen (DD 536), Stephen Potter (DD 538) and Tingey (DD 539).
Visit the The Sullivans Association web site.

The Sullivans’ record typified that of destroyers assigned to Third and Fifth Fleet fast carrier task forces in the Pacific in 1944–45. Deactivated after World War II and then reactivated for the Korean war, she continued operations in the Atlantic and Mediterranean until 1965, when she decommissioned at the Philadelphia Naval Shipyard. She remained in reserve until 1977, when she and cruiser Little Rock (CG-4) were donated to the city of Buffalo, New York, where they now serve as a memorial at the Buffalo and Erie County Naval & Military Park.