FROM
Before Your Time
By Nate Cook

0800 Wednesday, February 27, 1943 — Naval Receiving Station, New York City. More than 100 young men standing around, stark naked, waiting to be “processed” into the Navy. Most had been drafted; a few, like myself, had enlisted—volunteers. Of course, one of the first things we were told in the Navy was “Don’t volunteer for anything!”

I had spent the night in Greenwich Village with Uncle Clark and Aunt Ann Bingham so that I could be on time in the morning. They had taken me out to dinner, the last good meal I was to have for some time. In the restaurant, they asked if I would like a “drink”; and I said “no.” I had never ever been asked before! I was “Mr. Country Bumpkin Naiveté.” I was sexually pure, I had never tasted alcohol, or even had a cup of coffee (I didn’t like it). With the exception of a few nights in Boy Scouts, I had never been away from home overnight. And if we don’t count lust, my biggest sins to date were to smoke a few cigarettes and to enjoy a bit of exploration with Margie! I had been protected, spoiled and generally very well treated by a lot of very nice people. I really wasn’t thoroughly prepared for the Navy! 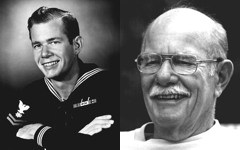 Nathan H. (“Nate”) Cook (1925—2005) left high school at age 17 to join the Navy. After the War he finished high school and attended M.I.T. on the GI Bill where he obtained four degrees culminating in the Doctor of Science in Mechanical Engineering (1955).

He served on the M.I.T. faculty until his retirement, deeply involved with students and in teaching, research, and industrial consulting for more than 100 organizations.

This “first person” writing (1995) is part of his description of his ancestry and life that he produced under the title “Before Your Time” for the edification of his children and future progeny.

During the pre-swearing-in activities we were poked and probed by the doctors; we were asked how intimate we had been with our sisters or other relatives (including male); and we first met the phrase “Skin ’er back and milk ’er down,” a phrase I was to hear often during my Navy career. Even after we had all been at sea for many months, the Navy wanted to know whether any of us had contracted a venereal disease! Some of the officers might have had an opportunity, but none of us enlisted men did!

I was concerned that my eyesight might not be good enough. But through practice, I had taught myself to squint enough so that my near-sighted right eye could pass the 6/20 Navy requirement; and I guess I passed everything because at about noon, we were sworn in. Clark and Ann had come uptown to see the swearing-in ceremony—a very short ceremony, but I was pleased to see them.

My fellow enlistees covered a wide social spectrum. A few had been protected in life as I had, but most either were “street-smart,” or at least acted street-smart. We were mostly from the New York—New Jersey area with many from Brooklyn, the Bronx, and Newark. Generally, they were a lot less naive than I was!

In mid afternoon, we were herded aboard a very old “troop-train” heading for the Great Lakes Naval Training Station (GLNTS), outside Chicago. It was cold weather, the coach windows leaked a lot, and the engine was a coal burning, soot spewing, steam engine. We were soon sooty, cold, and wondering why we were there! We were given sandwiches and water for supper, and we tried to sleep.

Imagine my surprise, at 2 or 3 a.m., to find us stopped in the Washington, DC railroad station—a direct route from New York to Chicago? I was even more surprised to see a whole group of young girls on the platform. The street-wise guys had their windows up, and were leaning out, kissing and fondling the young ladies! My new “shipmates” were making almost as much instantaneous progress with these gals as I had made with Margie in 2 years!

The rest of the trip was uneventful, and 30 hours after leaving New York we were bussed from the train to GLNTS. As we drove in the gates, we were greeted, (as all new service men were greeted) by a group, who had probably arrived the previous day, shouting such things as “You’ll be sorry!”, and “Wait till you get the square needle in the left nut!” A new and different life had started for me. I had wanted the Navy, and now I had it! (continued)