Visit Bob Ross’ USS Hudson home page, long-time primary source of information from and for shipmates and reunion organizations.
USS Hudson, DD 475, “the destroyer that saved a carrier,” was laid down at Boston Navy Yard with Charrette, 20 February 1942. The two ships were also launched on the same day, 3 June 1942.Hudson commissioned 13 April 1943, the third US Navy ship of her name and the 56th ship of the 2,100-ton Fletcher class. She was named for an early 19th century naval officer. Her first commanding officer was Cdr. William R. Smedberg, III, who previously put Lansdowne in commission. Her first executive officer was LCdr. Richard R. Pratt, Lansdowne’s first gunnery officer.

Hudson in the Solomon islands.

After shakedown and escort duty along the Atlantic coast, Hudson sailed for Éfaté, New Hebrides, where she joined Destroyer Squadron 45 in time to provide fire support for initial landings at Bougainville’s Empress Augusta Bay, 1 November 1943, beginning the final phase of the Solomon Islands campaign.

While Cdr. Pratt relieved Cdr. Smedberg 23 December 1943, the “Hard Hitting Hudson” (Smedberg’s nickname) continued with her squadron in supporting further landings at Bougainville and Green Island and bombardments of Kavieng and Rabaul in the Bismarck Archipelago. With Guest, she also depth charged and sank submarine I-171 thirty miles northwest of Bougainville, 31 January 1944.

The squadron then moved north to the Carolines and Marianas for the invasions of Saipan, Guam and Palau, followed by overhaul at Hunters Point. Returning to action at Iwo Jima, 19 February 1945, Hudson was assigned radar picket duty and, on 8 March, rescued eight survivors of a B-29, which had crashed at sea.

Continuing her radar picket assignment for the invasion of Okinawa, 1 April, she sank her second submarine, RO-49. four days later. Although frequently under attack from enemy aircraft, she escaped with little more than scratches and injury to a chief petty officer who was clipped in the head by the wingtip of a Kamikaze that crashed close aboard 22 April. 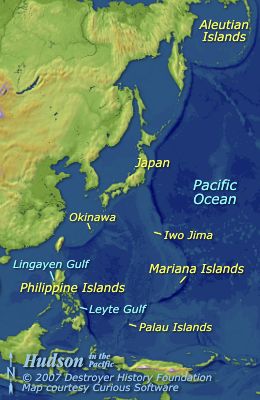 Hudson in the western Pacific.

On 4 May, after a suicide plane crashed escort carrier Sangamon, setting her afire. Capt. Pratt conned Hudson alongside to help fight fires amid exploding ammunition. As the carrier was rolling heavily, her overhanging flight deck tore away Hudson’s port bridge wing, knocked a big searchlight off its mounting, and smashed a 40mm gun mount. Desperately clearing their flight deck, Sangamon’s deck force jettisoned a flaming plane overboard—onto Hudson’s fantail, where it started fires among the depth charge racks. Hudson suffered no casualties but repairs took her back to Guam for repairs 10 May. For her performance at Okinawa from 1 April, Hudson later received the Navy Unit Commendation.

Hudson returned to Okinawa 22 June, then was assigned to convoy duty in the Marshalls and to the Aleutians. After the surrender, she sailed to northern Japan to take part in the occupation and control of the enemy home islands, arriving 8 September. From Japan, Hudson returned to Alaska, where she joined her division in transporting veterans back to the states in “Operation Magic Carpet.”

Hudson decommissioned 31 May 1946 and was placed in reserve at San Diego. There she remained until stricken in 1972 and sold to Zidell Marine, which scrapped her at Tacoma, Washington beginning 14 December 1973.

In addition to her Navy Unit Commendation, Hudson earned nine battle stars for her service in World War II.