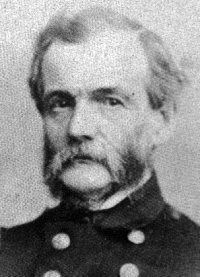 William Radford was born at Fincastle, Botetourt County, Virginia, 1 March 1808, a member of the family that founded Radford, Virginia. Appointed midshipman on his seventeenth birthday, he was promoted lieutenant 3 February 1837.

He served in the Pacific during the war with Mexico and commanded the party that cut out the Malek Adel at Mazatlan in 1847. Promoted commander on 14 September 1855, he assumed command of frigate USS Cumberland in 1861. Promoted captain 16 July 1862 and commodore 24 April 1863, he served on court-martial duty at Fort Monroe.

In action on Christmas Eve, Admiral Porter reported that New Ironsides “took her position in the most beautiful and seamanlike manner, got her spring out, and opened deliberate fire on the fort which was firing at her with all its guns . . . they were silenced almost as soon as the New Ironsides opened her terrific battery . . . Commander Radford has shown ability of a very high order, not only in fighting and manoeuvring his vessel, but in taking care of his division. His vessel did more execution than any other in the fleet, and I had so much confidence in the accuracy of his fire that even when our troops were on the parapet he was directed to clear the traverses of the enemy in advance of them. This he did most effectually, and but for this the victory might not have been ours.”

Following the war, on 25 July 1866, Commodore Radford was promoted rear-admiral. He commanded the European Squadron from 1869 until his retirement 1 March 1870.