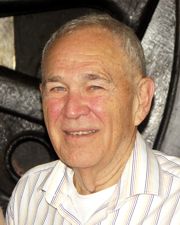 Nicholas was the first Fletcher-class destroyer launched, a lean, graceful flush-decker designed to go into harm’s way. It was 376 feet overall with a 40-foot beam—one block long and across-the-street wide and hinged in the middle to prevent breaking in half in any kind of sea.

Nicholas had a top speed of 34 knots—38 miles per hour—powered by two steam turbines that produced a bone-shattering ride even in the calmest sea. But it was an unforgettable ride and an awesome sight, with that distinctive rooster-tail wake rising from the hove-down fantail as twin screws churned the blue sea into creamy froth and spray while the ship rolled and pitched like a thing alive.

Nicholas’s primary function was antisubmarine warfare, but it also conducted shore bombardments and helped defend other ships against air attack.

Because they are small ships, destroyers are hard to hit, but easy to sink. Danger abounds.

As a result, tension at sea, normally, is almost tangible, and in the war zone even more so, but there is no fear. Sailors are apprehensive, of course, and alert, but that’s normal when the elements themselves seem bent upon destruction. Nevertheless, each sailor recognizes that duty must be done, and each sailor remains confident that every other sailor is competent and will do his duty.

In no other job is so much confidence for one’s own safety, one’s very life, placed in the ability and desire of others to do their jobs successfully, to pit their skills against everything the sea, the weather, and the enemy can throw against them. At sea, it’s routine. At sea in a destroyer, it’s incredible.

Every day at sea in the war zone, sailors go to battle stations in the gray predawn—even if they had stood the mid watch—and in the hazy dusk, because those are the most dangerous hours of the day, the hours of least visibility. Even though those are routine battle station duties, sailors man their stations as quickly as possible. There just might be a real reason.

But, when that oooga-oooga-oooga of real battle stations sounds, followed by “All Hands to General Quarters,” surging adrenaline pushes sailors out of their bunks. They hit the deck running, dressing as they race along the heaving deck to their battle stations, even in the pitch blackness of night; they are that familiar with the layout of the ship.

Nobody runs into each other because the rule is up and forward on the starboard side, down and aft on the port side.

It was not unusual for sailors to remain on battle stations for several hours at a time, the tension of waiting and watching broken either by battle, alternately furious and apprehensive, or by a cup of coffee on station. Sometimes, during a lull in the action, sailors are relieved one or two at a time to lay below for a quick sandwich and a quiet cup of coffee.

Destroyers were designed for fighting, not for comfort. They and their crews are part of the “dungaree navy,” ships that do away with much of the ceremony of larger ships—dress uniforms, salutes, inspections and crews who dress in dungarees on and off duty, even on the bridge.

In the South Pacific, destroyer sailors put up with 105° temperature in the berthing compartments, water rations, short showers, strange meals, never-ending motion, and other difficulties of life at sea for one reason: There was no alternative.

Nicholas had two shower stalls aft for 250 men, so there was always a line of naked men awaiting their turn. Because destroyers had severely limited capacity for fresh water, showers were an exercise in restraint. Each man entered the shower stall, turned on the water long enough to get wet all over, stepped out and soaped down. While that man was soaping down, other men would step in, get wet, step out, and soap down. As each man judged himself clean, he would reenter the shower stall, rinse off, step out, towel dry, dress, and leave.

And the noise! Of course, in battle, when all the cannons are firing, that’s noise enough. But, without all that, in a normal sea, a destroyer is a noisy ship. There’s always the whine of the wind and the slap and splash of the sea along the hull . . . the whump-whump of the screws as they break the surface and their steady rumble as they bite under water and drive the ship . . . the thump of twin anchors against the hull as the bows heave and fall even in a moderate sea the slosh of the sea as blue water surges onto the fo’c’stle and sluices through the scuppers or slams solidly against the bridge windows 40 feet above the waterline . . . the shriek of the steering engine as the helmsman makes even minor corrections in course . . . the occasional clatter of tools dropped onto the steel deck . . . and the continual mutter of talk as the sailors go about their duties.

Even so, there’s a human quietness and dignity about the ship. Sailors, generally a cheery lot, seldom raise their voices as they go about their tasks. They know their duties and perform them without fanfare.

That quietness is necessary because the safety of the ship is paramount. At sea, sailors do constant battle against the elements, storms, gales, typhoons; against mast-high waves and punishing winds; against seas so rough sailors cannot stand or walk or even stay in their bunks without holding on.

Even in a calm sea, destroyer sailors eat with one hand while balancing their trays with the other, and walking is always a test of balance. Destroyer sailors develop sea legs quickly—a special roll that, ashore, singles out the destroyer sailor from among other ship crews.

In a rough sea, life takes on a new meaning as the ship rolls and pitches and leaps and falls and slings itself about like a thing alive and berserk.

Normal ship’s work is suspended because it cannot be performed. Ship’s cooks cannot prepare proper meals, producing only beans and coffee as long as the rolling and pitching continue.

Some ship’s work cannot be suspended; because the ship must make way, must survive. Regardless of the difficulties, engineers stand watch in the sweltering heat of the engine rooms and boiler rooms; quartermasters and signalmen stand watch on the sluing bridge; lookouts on the wind- and spray-swept flying bridge remain alert for danger from the sea, from ships, from the enemy; radio operators lock their legs around chair legs set in deck brackets to hold them in place and copy messages that carry life or death information; and gun crews are on standby around the clock.

Despite the harshness and perils of life in a destroyer at sea, and the dangers of war, destroyer sailors would take no other duty. Few ever transfer to larger ships; fewer voluntarily. Duty in a destroyer, in war or peace, in fair winds or foul seas, is a grand adventure, one that ought not be missed.

Because of destroyers’ small size and light construction and their constant rolling and pitching at sea, they are called (derisively by crews of larger ships, but affectionately by their own crews) “tin cans” or “cans.” The appellation applies equally to the crews. In truth, such ships and their crews really “can.” From the beginning, destroyers “have done,” and there’s no doubt that they will continue “to do!”

In peace and in war, destroyer duty creates a strong camaraderie among destroyer sailors. They are “tin can sailors,” a special breed, at one with the ship and the sea. They probably are the last true sailors, generally recognized as the best sailors in the world.