The Battle of Rennell Island
By Jack Wilkes
Jack Wilkes, long-time leader of the USS La Vallette Association,
was a telephone talker in January 1943.
A few days before this event I had sold a wrist watch for $20.00. A short time later a shipmate was in a poker game and ran out of money. So he came to me and offered me a collector’s item—a lady’s locket watch that he had stolen from a date while in New York. I gave him the $20.00 that I had received for my watch just a few days earlier. The inside of this watch is engraved and was presented to some lady in Jan. 1884.

A few days later we were in port and I stood deck watch with Lt. Eli Roth. He had just received a letter from his wife stating that their son had just been born. He showed me a picture of the new arrival and a picture of his wife. While in port I started to send my mother the watch but decided to wait until the next port.

I went on watch at 1600. I reported some planes very high in the air. I was told not to worry that they had been reported as friendly planes. About dusky dark one of those planes peeled off and came down our starboard side strafing everything in sight. The man standing watch on the 40mm guns on the fantail opened fire. Did not hit him. General Quarters were sounded. The Chicago was hit by torpedoes. We remained at GQ until I think about mid-night. I saw back-fire from several planes that came by us. We were released from General Quarters and I went to bed. The next day I heard that the man who opened fire was reprimanded for opening fire with out orders. Was told that it could have been a friendly plane. The man stated that he did not care who it was the S.O.B. was shooting at him and the only reason that he did not shoot the plane down was that he missed.

I reported for my watch at 1600.I was informed from the bridge that we might have some enemy planes headed our way so keep a sharp look-out. About 1620 I reported sighting 12 planes (the Log has 11) approaching from the port side very close to the water. GQ was sounded and very shortly all hell broke loose. I was just a bystander as my station was port K-guns and you cannot shoot depth charges at planes. 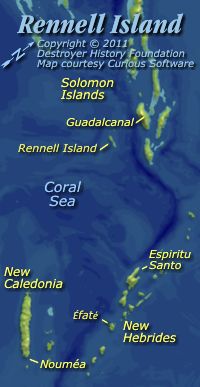 The log states that we were credited with shooting down 6 of those planes. I saw 2 of the planes on fire—I will always believe that the plane that hit us was trying to crash us but he was on fire. I was trying to hide behind the depth charges but was hit in my lower legs—my left leg was only scraped but my right leg the bullet pierced the calf of my leg. I was so scared that I felt no pain. I saw the torpedo coming down and with the angle I thought it would go under the ship. The last thing that I remember was the ship almost coming out of the water and I saw nothing but water coming my way and I was knocked unconscious.

When I regained consciousness I was as far aft as my telephone line would allow me to go. When I started to stand up I had severe pain in both legs. It looked as if my shoes were full of blood. I also had a burn under my chin where the phone strap was fastened. My night was very painful. I finally looked at my watch and it had stopped 21 minutes and 30 seconds after 4 P.M. It is still on that same time.

All wounded were ordered to report to the officers wardroom. With the help of some shipmates I made it to the wardroom where I spent the next 3 days until we arrived in port and I was placed aboard the Dixie in the hospital.

I cannot tell you anything about getting under tow by the tugboat Navajo. I did not see the Chicago go down as she was on our starboard side and I was on the port side.

I mentioned Lt. Roth earlier. He was one of those killed. As you probably already know 22 were killed and 7 of us were wounded.