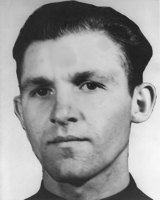 Elmer Charles Bigelow was born at Hebron, Illinois on 12 July 1920. He enlisted in the Naval Reserve at Chicago in September 1942. He received training at Great Lakes Naval Training Center, Illinois, and at Lawrence, Kansas, before being attached to Fletcher in June 1943 as a fireman third class. He later was advanced in rate to water tender second class.

On 14 February 1945, while assisting minesweeping operations prior to landings on Manila Bay’s Corregidor Island, Fletcher was hit by an enemy shell and set afire. Bigelow heroically fought the blaze, contributing greatly to saving his ship, but was badly injured and died the next day. He was posthumously awarded the Medal of Honor for “conspicuous gallantry and intrepidity.”


“For conspicuous gallantry and intrepidity at the risk of his life above and beyond the call of duty while serving on board the U.S.S. Fletcher during action against enemy Japanese forces off Corregidor Island in the Philippines, 14 February 1945. Standing topside when an enemy shell struck the Fletcher, BIGELOW, acting instantly as the deadly projectile exploded into fragments which penetrated the No. 1 gun magazine and set fire to several powder cases, picked up a pair of fire extinguishers and rushed below in a resolute attempt to quell the raging flames. Refusing to waste the precious time required to don rescue-breathing apparatus, he plunged through the blinding smoke billowing out of the magazine hatch and dropped into the blazing compartment. Despite the acrid, burning powder smoke which seared his lungs with every agonizing breath, he worked rapidly and with instinctive sureness and succeeded in quickly extinguishing the fires and in cooling the cases and bulkheads, thereby preventing further damage to the stricken ship. Although he succumbed to his injuries on the following day, BIGELOW, by his dauntless valor, unfaltering skill and prompt action in the critical emergency, had averted a magazine explosion which undoubtedly would have left his ship wallowing at the mercy of the furiously pounding Japanese guns on Corregidor, and his heroic spirit of self-sacrifice in the face of almost certain death enhanced and sustained the highest traditions of the United States Naval Service. He gallantly gave his life in the service of his country.”
« « «
Forrest Sherman-class destroyer Bigelow (DD 942), was named in his honor.