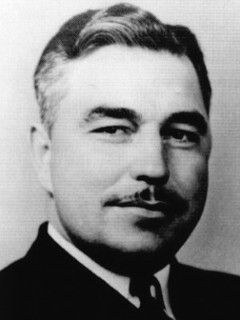 Ernest Edwin Evans was born 13 August 1908 at Pawnee, Oklahoma. He was graduated from the Naval Academy in 1931. During World War II, he commanded Alden (DD 211), and later Johnston (DD 557). Commanding Johnston he was awarded the Bronze Star for meritorious achievement in action against a Japanese submarine on 16 May 1944

At the Battle off Samar on 25 October 1944, fought his ship gallantly until it was sunk by Japanese force superior in number, firepower and armor. Commander Evans was posthumously awarded the Medal of Honor for his material contribution to the decisive victory won in Leyte Gulf and shared in the Presidential Unit Citation awarded his group for this action in which he gave his life.