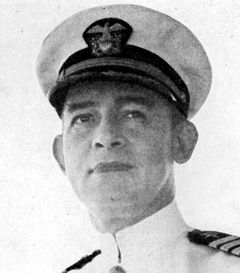 Franklin Van Valkenburgh was born in Minneapolis, Minnesota, 5 April 1888. Appointed a midshipman in 1905, he was graduated from the U.S. Naval Academy in June 1909.

His initial service was in battleships, punctuated by a tour with the Asiatic Squadron in 1911–14. He received postgraduate education in the field of steam engineering and was engineering officer in battleship Rhode Island during the First World War. Van Valkenburgh was twice an instructor at the naval academy during the late teens and twenties, and also served in the battleships Minnesota and Maryland during that time. Promoted commander, he was assigned to the Office of the Chief of Naval Operations in Washington, DC 1928–31.

In the early 1930s, Commander Van Valkenburgh commanded the destroyer Talbot and Destroyer Squadron Five. He was a student at the Naval War College and Inspector of Naval Materiel at the New York Navy Yard before again serving at sea as Commanding Officer of the destroyer tender Melville in 1936–38. Captain Van Valkenburg then spent a tour ashore with the Third Naval District and, in February 1941 became commanding officer of the battleship Arizona.

During the 7 December 1941 Japanese attack on Pearl Harbor, he was killed in action when his ship exploded and sank. He was posthumously awarded the Medal of Honor “for conspicuous devotion to duty, extraordinary courage and complete disregard of his own life, during the attack on the Fleet in Pearl Harbor, T.H., by Japanese forces on 7 December 1941. As commanding officer of U.S.S. Arizona, Captain Van Valkenburgh gallantly fought his ship until the Arizona blew up from magazine explosions and a direct bomb hit on the bridge which resulted in the loss of his life.”