The attack of DesRon 54 at the Battle of Surigao Strait. 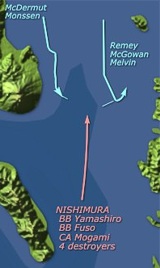 Flagship Remey, first to commission, joined the Pacific war during the Marshall Islands operation in January 1944, but in February struck an uncharted reef and did not return to the war zone until May.

In June, the entire squadron gathered for the Marianas Operation, for which it was attached to RAdm. Oldendorf’s Fire Support Task Group 52.17. Off Saipan on the 14th, Melvin sank submarine RO-36 and a merchant ship; the next day with Wadleigh, she added RO-114. Off Tinian on 24 July, however, Norman Scott sustained six hits from shore batteries, which put her out of the war until Leyte, although she returned too late to rejoin the squadron before the Battle of Surigao Strait.

The squadron moved on to Palau where, on 16 September, Wadleigh fouled a mine during a mine clearing operation at Kossol Roads. She was repaired at Mare Island and rejoined the war in May 1945.

At the ensuing Battle of Surigao Strait, the squadron delivered the highest-scoring torpedo attack of the war. From long range, Remey, McGowan and Melvin opened the battle with a salvo of 27 “fish”: Melvin was credited with sinking battleship Fuso. About ten minutes later, McDermut and Monssen scored from a different bearing: McDermut hitting destroyers Yamagumo, Michishio and Asagumo, sinking the first two; Monssen damaging battleship Yamashiro.

Thereafter assigned to escort Fifth and Third Fleet fast carriers, the squadron continued its tour in the Iwo Jima and Okinawa operations. In April during the latter, Mertz sank submarines RO-46 and I-56 and Monssen sank RO-56.

DesRon 54 closed out the war with the Third Fleet in its air strikes and shore bombardment of the Japanese homeland and, in August, moved briefly to the Kurile Islands. After the surrender, the squadron steamed south to Japan and then returned home—the four Bath-built ships after participating in post-war minesweeping operations. 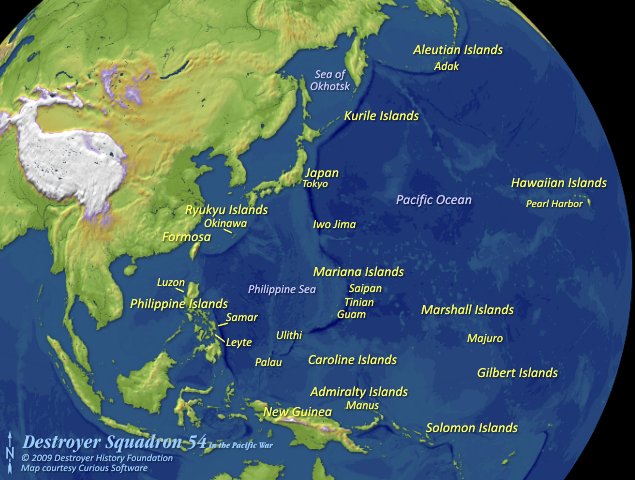