Capps, the first to commission, was (with Jenkins) one of only two 2,100-tonners to earn an engagement star for service in the Atlantic: from September through November 1943, she operated from Scapa Flow with USS Ranger (CV 4) and the British Home Fleet in missions as far north as Norway and as far south as Gibraltar.

Twiggs also operated in the Atlantic early in her career, from Norfolk as a training ship until May 1944.

Beginning in December 1943, all other DesRon 51 ships began making their way to the Pacific, some in time for the Marshall Islands operation, continuing in various combinations through the Marianas operation, where Haraden was damaged in a bomb attack, and Palau.

For the Leyte landings in October 1944, all nine ships operated with the Third Fleet’s Logistic Group. At the end of the year, DesDiv 101 continued on to Luzon, where Haraden was again damaged while escorting a carrier task force in the Sulu Sea and again returned to the West Coast for repairs. David W. Taylor, attached to a task force striking the Bonin Islands meanwhile, sustained an underwater explosion, probably a mine, and also went home.

In 1945, the seven ships remaining in the war zone participated in the Iwo Jima operation. David W. Taylor returned to join them in time for Okinawa, after which she and John D. Henley closed out the war with the Third Fleet off Japan while the other surviving ships of the squadron returned home.

Evans received the Presidential Unit Citation for her action with Hugh W. Hadley off Okinawa on 15 May 1945. Severely damaged, she was not repaired following the war. 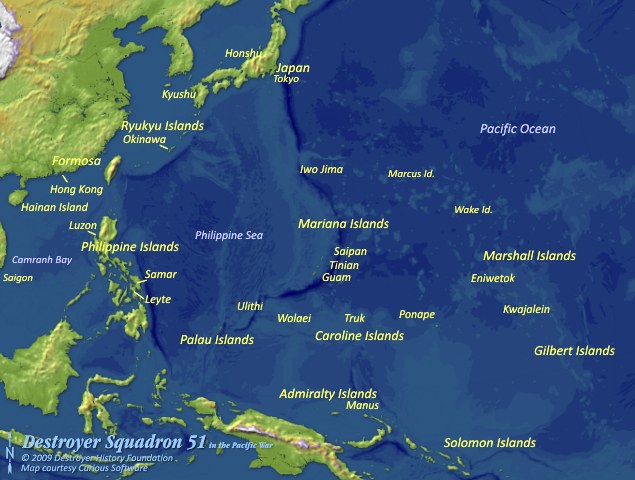