After the loss of Brownson, Killen (DD 593) from Puget Sound Navy Yard, commissioned in May 1944, was assigned to replace her.

In May, before the squadron was formed, Ammen was deployed to Alaska for the operation against Attu. In July, she returned to the Aleutians with Abner Read and Bache to bombard Kiska in preparation for landings. It was discovered on 17 August 1943, that the Japanese had evacuated the island; that same night, however, Abner Read sustained heavy damage from an explosion thought to be a mine, losing 70 killed and 46 wounded. She was towed eventually to Puget Sound Navy Yard for extensive repairs.

Less Abner Read, the entire squadron formed at Milne Bay, New Guinea in late December, where it was attached to the Seventh Fleet. It immediately operated with cruisers Nashville and Phoenix in Rear Admiral Berkey’s Task Group 74.2 in “Operation Backhander,” the landing at Cape Gloucester, New Britain, in the Bismarck Archipelago, where Brownson was lost.

In January 1944, cruisers Phoenix and Boise with DesDiv 48 bombarded Madang and Alexishafen, New Guinea. Beginning 27 February, Nashville and Phoenix with DesDiv 47 provided fire support for landings in the Admiralty Islands; Seeadler Harbor was secured at the end of March.

Killen joined the squadron for the Leyte operation in late 1944, in which it delivered a torpedo attack at the Battle of Surigao Strait. Abner Read was subsequently lost to one of the first suicide planes. While Bush continued on to Luzon and Killen moved to Borneo with the Seventh Fleet, the remaining ships of the squadron returned to the West Coast for overhaul.

In 1945, the squadron returned to the war zone in time for the Iwo Jima operation but suffered severely at Okinawa. There, Ammen and Daly sustained near misses, Bache, Hutchins and Mullany were heavily damaged—Hutchins too severely to be repaired—and Bush and Calhoun were lost to suiciders. Only Ammen, Beale and Daly remained to participate in Third Fleet operations of Japan at the close of the war. 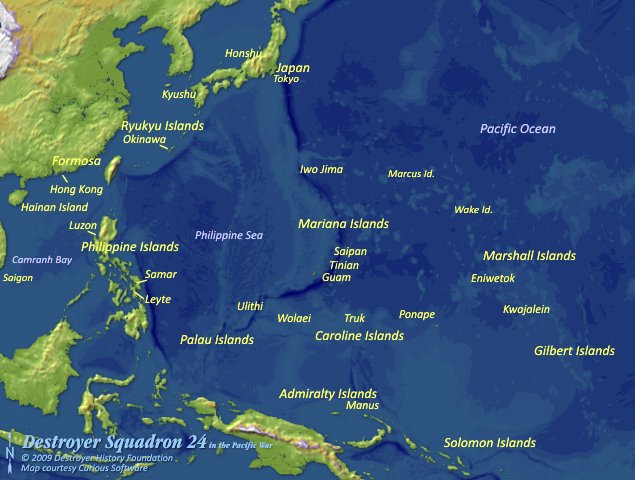