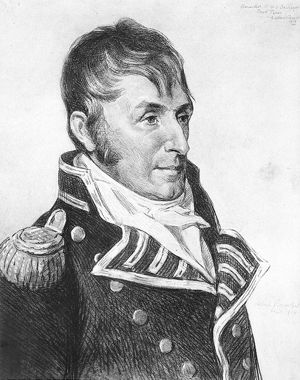 Jacob Jones was born near Smyrna, Delaware, in March 1768.

Appointed Midshipman 10 April 1799, he served in United States during the quasi-war with France.

In 1803 he sailed in frigate Philadelphia to the Barbary coast. On 31 October, when Philadelphia ran aground near Tripoli harbor, Jones was captured by the Tripolitans and held prisoner for 20 months. Upon his return to the United States, he served in Adams and Argus and on 4 June 1810 took command of sloop Wasp.

After the outbreak of the War of 1812 with England, Wasp captured brig Dolphin 13 October 1812; and defeated British ship-of-war Frolic in a bitter struggle off the Delaware capes on the 18th. Commissioned Captain 3 March 1813, Jones then commanded Macedonian and later in the war rendered valuable service to Commodore Chauncey on Lake Ontario. Upon the return of peace with England, he again commanded Macedonian, joined the Mediterranean Squadron under Commodore Decatur, and took part in securing lasting peace with the Barbary powers.

Captain Jones assumed command of the Mediterranean Squadron in 1821; and in 1824 he was appointed to the Board of Navy Commissioners. Two years later he became commander of the U.S. Naval Forces in the Pacific.

At the time of his death, 3 August 1850, Commodore Jones was Commandant of the Naval Asylum at Philadelphia.